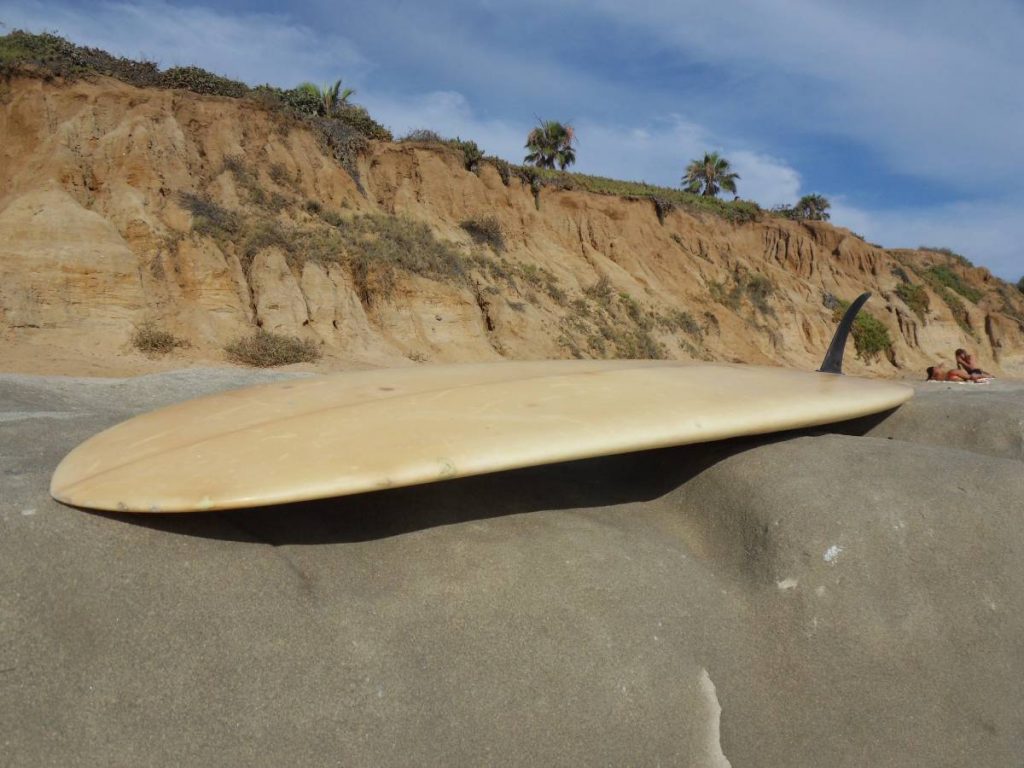 Greetings, Shredderz! Today we have a quick hit for you, but I’d like to think it’s a good one. The board pictured here — again, a big shout out to those Craigslist sellers out there who go above and beyond with their pics — is a Morey-Pope Sopwith Camel model. I’ve written about Tom Morey many times, and I’m not planning on stopping any time soon. Morey is one of the rare individuals who covers both quality and quantity with his inventions, which include removable fins, traction and the Boogie board, to name a few. For you more traditional types, Morey has a math degree from USC and worked as an engineer for Douglas Aircraft before letting his brain loose in the direction of surfcraft. Now that is a resume.

There’s so much of Morey’s career that deserves our attention, but I personally have a soft spot for the shapes he created under the Morey-Pope Surfboards label, alongside Karl Pope. Morey-Pope had a number of out there designs, befitting the famously eccentric Morey (who later went by “Y”, Prince style). The short-lived label released a number of variants on the Morey Pope Camel model. While I believe the standard Camel and the Sopwith Campel were most common, I’ve written up a Mini-Pepper and a 3/4 Camel (no, I’m not making up those names.)

There’s currently a very cool Morey-Pope Sopwith Camel that is listed for sale on Craigslist in Orange County. You can find the listing here. The seller is hoping for a trade, and you gotta love the pre-emptive notice that he’s not looking to swap for any waterlogged D-fins. My man is fighting the good fight on Craigslist, that’s for sure!

You can click the photos above to enlarge. According to the seller, the board measures in at 7’3″ x 22″, and it was likely shaped in either 1968 or 1969 during the height of the Transition Era.

I’m unclear on whether or not the Morey-Pope Sopwith Camel is considered a proper displacement hull. The board’s dimensions and the pics above — notably, the S-Deck and the convex bottom — suggest that it is, but that’s a guess. I hopped over to the Encyclopedia of Surfing to read their entry on the displacement hull but wasn’t able to find anything conclusive.

You can check out the Craigslist post here. As a bonus, check out the sweet Morey-Pope stringerless board that Buggs posted below.