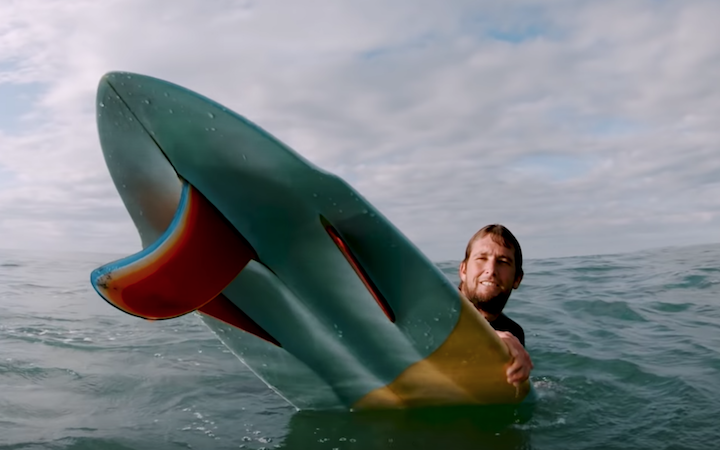 Greetings, Shredderz! Today we’ve got an assortment of videos for you. Every time I sit down to write a new Clipz entry I’m always stoked at the quantity and quality of new edits. Choosing a handful of favorites invariably means leaving some high quality entrants off the list, like young Hunter Martinez’s new full length film “Lost In Thought.” Anyway, back to our regularly scheduled programming — keep scrolling for some video clips I’ve been enjoying lately, mostly (but not all) having to do with vintage and/or hand shaped surfboards.

Shout out to Surfer Magazine, which could easily coast by on its laurels but still produces some of the best surf content out there. This clip is a peek at two-time ASP World Longboarding champ Harley Ingleby‘s family quiver. Ingleby’s father has been collecting vintage boards since before Harley was even born. The end result is a tidy snapshot of Australian surf history, a subject I wish I knew more about. (Check out the peerless surfresearch.com.au for your fix of Aussie surf knowledge.) Ingleby takes a Larry Bertlemann twin fin out for a spin, including some nice GoPro footage. He also totes around an interesting looking bonza, as they’re called below the Equator. It’s the same board that can be seen at the photo at the top of the post, which I grabbed from the video. Sadly I can’t quite make out who shaped the bonza. I figure Col Smith and/or Jim Pollard are decent guesses, given their history shaping flowing channel bottom bonzers. See here for a similar looking bonza. Anyway, Ingleby spends most of the video expertly piloting a truly out there twin fin longboard (or “mal”, if you prefer), and the result is an all-around great little flick.

Slater’s Best Day of Surfing Ever, via Taylor Steele / The Momentum Files

As the caption accompanying the video says, “Kelly Slater said if he could re-live one day of his life over and over again forever, this would be it.” Not only is Slater the GOAT, he has probably chased (and scored) more swells than any other human on earth, especially when you consider his Tom Brady-like longevity. This particular session unfolded at Soup Bowls in the Barbados not quite fifteen years ago, I believe. The Momentum Files YouTube channel posts some great selections from Taylor Steele’s filmography. I highly recommend checking it out. This particular clip originally appeared in “Sipping Jetstreams.”

February has been featured more than a few times in the Clipz series, thanks to his stylish surfing. This clip is no exception.