Mike Croteau for O’Neill (I Think) 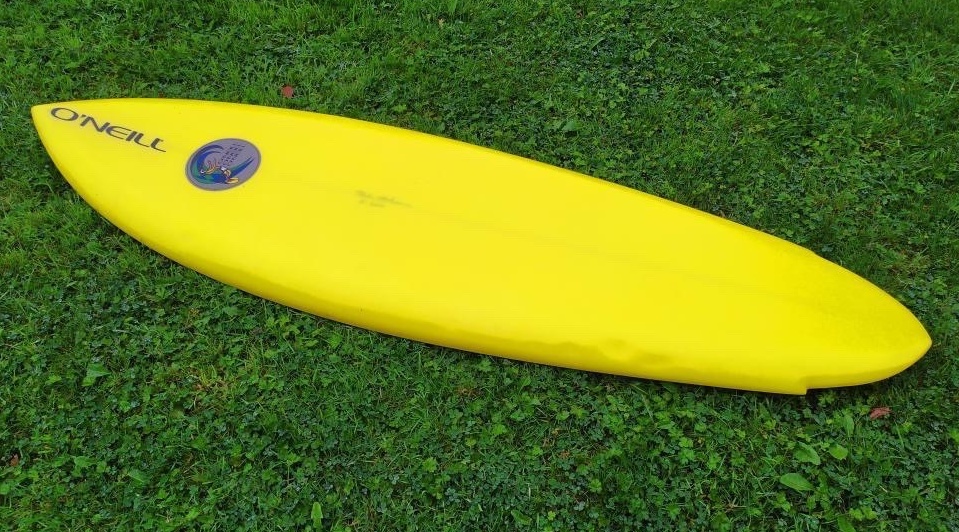 Greetings, Shredderz! Today we’ve got a sweet single fin that was sent to me by someone on Instagram. For the most part, I’ll write up boards here on the blog and then maybe throw up a picture on social media. Today’s post is the reverse — after originally posting the board on IG, I decided to devote a brief but more in-depth blog post to the stick, just because I liked it so much. One more caveat before we begin: I’m almost certain the board featured here is a Mike Croteau shape, but I’m not 100% sure. I’ll include a pic of the signature and let you compare for yourself. Click any of the photos below to enlarge.

More importantly, I love this board. Shout out to the board’s owner for taking such great pics. This is an extremely trivial point but I love the way the yellow pops against the nice green grass background. The Mike Croteau single fin also has some nice subtle details, including wings towards the tail, and then some very interesting looking channels on the bottom.

The channels in the tail are pretty subtle. They’re also very different from a previous Mike Croteau-shaped board that I featured recently. You can see some closeups below.

As for who shaped the board, I’m almost certain it’s Mike Croteau. First, Croteau has deep ties to Santa Cruz, and it looks to me as if this was a board created under the O’Neill label. O’Neill is of course best known for its wetsuits, but they have also produced some boards on and off over the years. That said, there’s a chance the O’Neill laminates were applied after the board was shaped, but seeing as how I don’t have the board available to me in person, I just can’t say.

See below for a comparison between the signature on the O’Neill single fin (on the left) and then the signature from the earlier Croteau / Straight Up Surfboards stick I wrote up a few months back. The signatures look pretty similar to me.

If you have more info or thoughts on the board, please let me know! I’d love to know more about this stick. Thanks again to the owner for sharing pics of this gorgeous single fin.