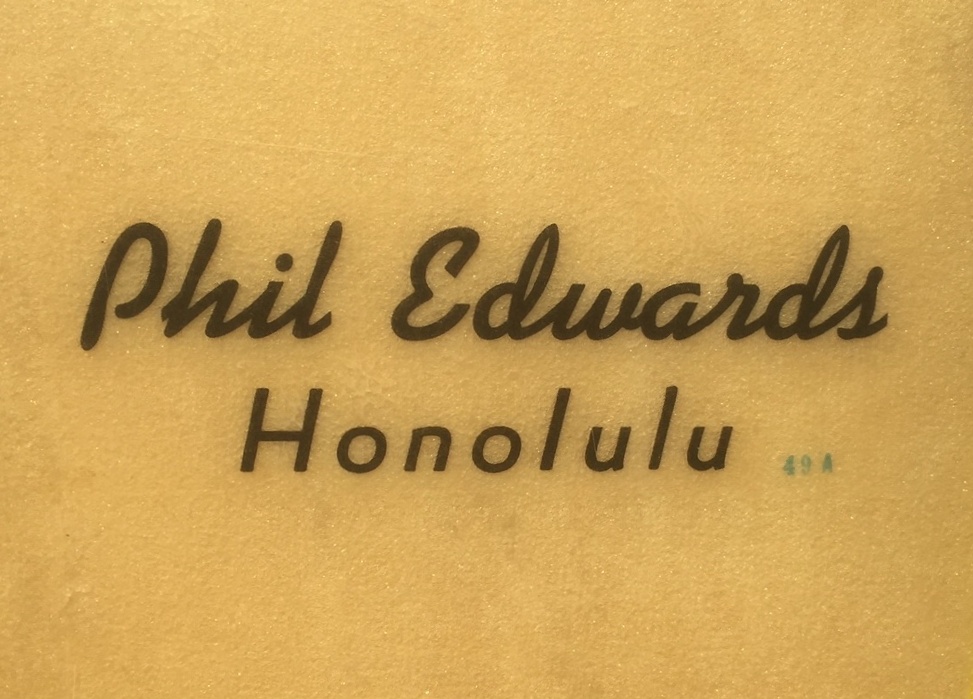 A few weeks back I was wasting time on Instagram when I came across a story about a Porsche barn find. Some lucky collector had stumbled across a beautiful sports car that had been stashed away in storage for decades and could not believe his luck. It got me thinking about what the surfboard equivalent of discovering a vintage Porsche would be. Now, I’m not a car guy, and if you’ve seen me surf, you might not think I’m a surfboard guy, either. But after giving it some thought I decided that finding a Phil Edwards Honolulu would be the surf version of stumbling across a Porsche 911 buried deep in some Midwestern barn.

You can imagine my astonishment when I was contacted about a week later by someone who owned a Phil Edwards Honolulu, wanting to know more about the board. The very same stick is pictured here in this post. The original owner’s aunt had purchased the board when she traveled to Hawaii in the late Sixties. Upon returning to the Midwest she put the board in storage, where it remained until her passing decades later.

I’m not exactly sure on the when the Phil Edwards Honolulu boards were shaped, and how many were made. Overall, PE Honolulu boards are quite rare, and I have read that Edwards didn’t shape that many of them to start. I believe Edwards shaped the Honolulu between 1967 and 1969, shortly after he had moved from his native California to Hawaii. Some of the later Phil Edwards Honolulu surfboards have very clear Transition Era influences on them, which supports the date range. The earlier boards, such as the A series one featured here, are classic Sixties noseriders. The closest thing I can find to a reliable date is board 18A, which was sold at a recent auction. The auction listing claims the board was shaped in 1968.

As you can see in the photos above (click to enlarge), the Phil Edwards Honolulu board featured here is a classic Sixties longboard. The length is somewhere in the 10′ range, and I’m sorry to say I don’t have any specifics. The board isn’t in perfect condition, but it is remarkably well preserved considering it is well over fifty years old. It has a beautiful purple resin tint and a contrasting yellow pin line, which matches the fin, too.

There aren’t many examples of PE Honolulu boards online, so I was super stoked to find one that hasn’t made the traditional auction and collector circuits.

I’m also happy to report that 49A will be making its way to a new owner sometime soon. I don’t want to give any spoilers but the Phil Edwards Honolulu surfboard will be returned to its home in Hawaii. All I can say about the owner is that he has appeared on Shred Sledz before and he is a talented craftsman with a deep appreciation for surf history and sweet vintage rigs. Finally, don’t be surprised if this exceptional stick ends up under the feet of a talented pro, but I’ll shut up for now.

Thank you for reading and check out a separate Phil Edwards B series board I posted about below.