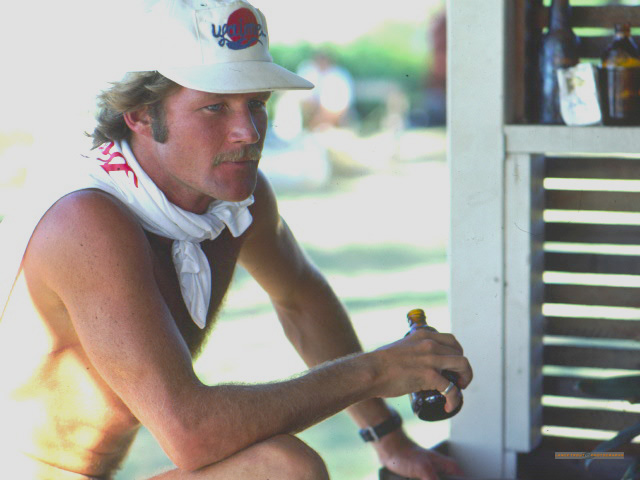 Greetings, Shredderz! A few months ago I had the good fortune to visit Oahu. Even if you have so much as a passing interest in surfing, Hawaii, and the North Shore in particular, is Mecca. Every winter the storied seven mile stretch of coastline becomes the center of the sport, hosting countless pilgrimages from around the world. Even for someone like me, whose surfing ability is best described as limited, a visit to Oahu’s proving grounds is practically required. During my time in Hawaii I had the good fortune of spending part of an afternoon with North Shore fixture Randy Rarick. Rarick, who still rips Sunset Beach, owns one of the most varied and fascinating surfing resumes on the planet: a surfer, first and foremost; a shaper, with stints at both Surf Line Hawaii and Lightning Bolt; an event organizer, who served as the longtime contest director for the Triple Crown of Surfing; and perhaps the authority on vintage surfboards.

Rarick is known for glass-off restorations of vintage boards. The process involves completely stripping off the fiberglass from a board and then re-glassing the shape. It is a long and laborious process that transforms beaters destined for the trash heap into showroom-worthy collectors’ items. If you have ever looked at recent high-end surfboard auctions, you have no doubt seen Rarick’s work. It’s also worth noting that Rarick pioneered the collector-focused surfboard auctions, although he has since passed the baton.

There are a range of opinions on the practice of full glass-off restorations — surfers are nothing if not opinionated — and at one extreme, the most vocal critics claim this can compromise the integrity of the board itself. Rarick has shared extensive thoughts on the subject, and for more on his perspective, I highly recommend this Surfer’s Journal profile. Many folks far more knowledgeable than me have weighed in on the subject, and while I personally love (and prefer) the slight imperfections of older boards, I simultaneously have a deep respect for the craftsmanship and attention to detail that goes into a full glass-off restoration.

Rarick’s shaping room has probably seen more classic surfboards than any other place on earth. As you can see in the photo below, Rarick preserves laminates from boards he has restored. Each one of the laminates pinned to the walls represents a board that Rarick worked on.

I love the practice of preserving the original laminates from these boards. If nothing else, it’s a great way to document the sheer number of notable surfboards that have passed through Rarick’s shaping room. When I picked up my jaw off the floor and told Rarick I couldn’t believe how many rare shapes he had restored, he casually mentioned that there had been even more laminates hanging up until someone had come through and purchased a bunch.

Rarick’s shaping room is small, and it’s hard to imagine a space with more surf history per square inch. And while there are plenty of reminders of all the boards Rarick has worked on in the past, I was just as interested in the projects that were currently under way. In the photo below you can see a unique wooden blank (second from top). The blank is actually crafted from wiliwili, also known as Hawaiian balsa, as part of a project with Tom Parrish, another renowned Hawaiian shaper and Lightning Bolt alumnus.

Parrish posted a different wiliwili board on his Instagram, which I have embedded below.

During my visit Rarick was in the midst of restoring an Inter-Island Surf Shop Hydro Gun shaped by John Kelly. The board would later appear at the California Gold Vintage Surf Auction.

One of the distinguishing characteristics of Kelly’s Hydro Gun is the insane Scorpion tail, which you can see below.

It was really cool to see the board as a bare blank, midway through the restoration process. I don’t have any photos of what the Hydro Gun looked like before the restoration, but the auction listing has some great shots of the finished product.

Rarick was incredibly generous with both his time as well as the vast amounts of knowledge he has accumulated over the decades. Speaking with Rarick was also a reminder of the importance of learning surf history by meeting the people who helped make it. There are times when I chafe at surfing’s fondness for oral tradition, mostly because it can make research so difficult. And while I am a proud advocate of putting as much surf history online as possible, my time with Rarick underscored the fact that it’s so much more informative and rewarding to speak to people in person, especially when those conversations take place steps from storied Sunset Beach. Thanks again to Randy Rarick for sharing his time and making this modest blog post possible.

Photo at the top of the page by Lance Trout; Randy Rarick, Sunset Beach, 1978.

[UPDATE: An earlier version of this post incorrectly identified Barry Kanaiaupuni as Reno Abellira. The caption has been updated. Sorry for the mistake and thanks to everyone who helpfully pointed it out.)