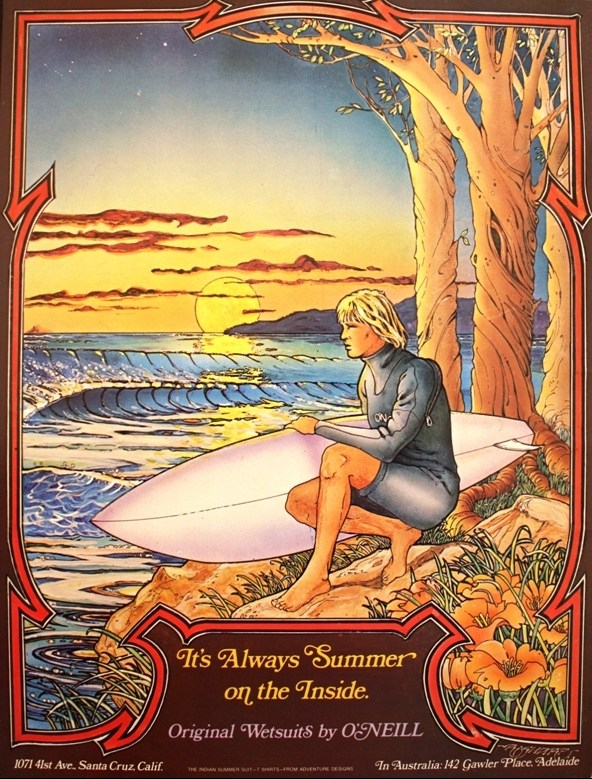 Greetings, Shredderz! Due to some unforeseen scheduling issues I was not able to provide a fresh scan of a vintage surf ad for this installment of Sagas of Shred. After spending some time in some strange Google rabbit holes — you haven’t hit rock bottom until you’ve scrolled through pages of results for “More Core Division” — I found the rad O’Neill advertisement you see here. The ad sports O’Neill’s classic “It’s Always Summer on the Inside” tagline, which was also the title of Jack O’Neill’s autobiography. The same tagline is also associated with O’Neill’s most infamous (and NSFW) ad, which you may have seen before. I found this image on a blog called Jack Elliott’s Santa Barbara Adventure. See here for the original post. The same blog also posted a very cool vintage Channel Islands Surfboards ad from the same year, which you can find here. According to Jack Elliott’s blog, the artwork in the O’Neill ad was done by an artist named Rick Sharp. I love this style and I can’t help but wonder if it’s overdue for a comeback! It appears as though Sharp continues to work today; you can check out his website here.

Thanks for reading and we’ll resume our regularly scheduled Sagas of Shred scans next Thursday.