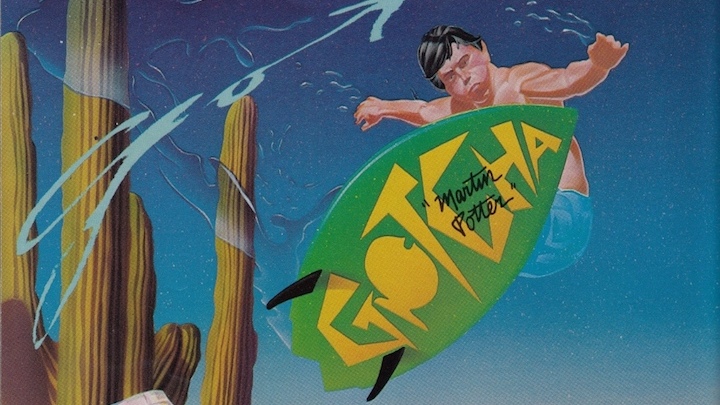 Greetings, Shredderz! For those of you who aren’t hip to the program, I scan a different vintage surf ad every Thursday evening and post it as part of the Sagas of Shred series. I’ve written up Gotcha’s groundbreaking advertisements many times here on the blog. If it’s still not clear, I’m a huge fan. By all accounts, Gotcha’s creative and brash marketing took its cues from founder Michael Tomson‘s larger than life personality. (Here’s a Stussy thruster that was shaped for Tomson, which, for my money, is one of the cooler boards I have written up.)

The Gotcha Martin Potter ad featured here originally ran in the April 1984 issue of Surfer Magazine (Vol 25, No 4). Let’s get the obvious out of the way: the surfer in the ad looks nothing like Martin Potter! It’s mind blowing to me that they would go out of the way to have an artist whip up an entire painting without making sure that it bore some resemblance to their star team rider at the time.

As for the rest of the ad…I mean, your guess is as good as mine. I can’t stop alternating between the surfer — who, let me repeat, could not look less like Pottz — and the (leg-less?) woman who looks like she’s about to pass out from heat stroke. This is to say nothing of the desert motif, much less the pairs of shorts that are inexplicably floating through the frame. And why does the surfboard cast a shadow, but Pottz does not? The longer I look at this Gotcha Martin Potter ad the more questions I have, and frankly, it’s starting to get a little late here.

That said, do I love all of it? Yes, yes I do. The Eighties were an incredible time in the surf industry, and I simply can’t get enough.