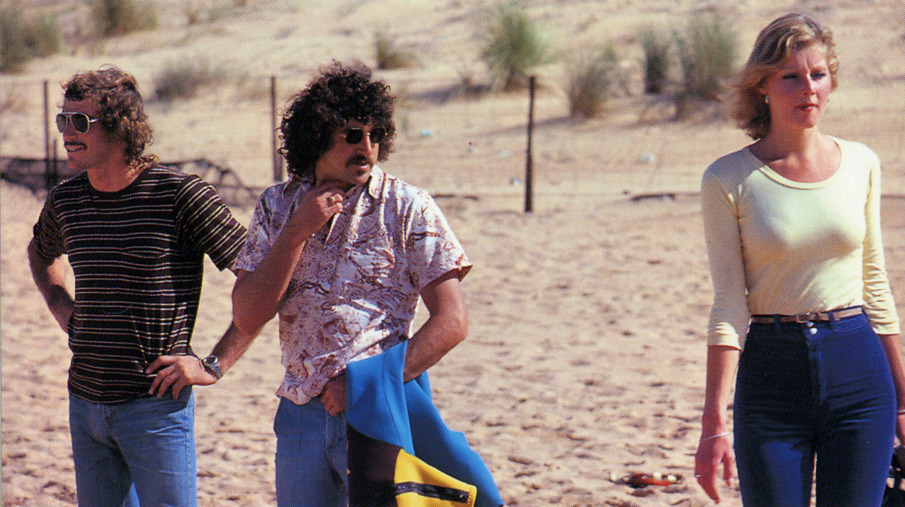 Greetings, Shredderz! Today we’ve got an unusual stick for you that represents one of my favorite corners of surf history: Australian / Hawaiian mash-ups. Last week’s Social Media Roundup featured MR and his collaborations with Ben Aipa on the latter’s famous sting. MR also recently posted an awesome photo of some boards he had worked on with Dick Brewer. Today’s post features a rad Owl Chapman single fin shaped under Rip Curl, the legendary Australian brand best known for its wetsuits. The photos of the board come courtesy of a reader who goes by Red Robo; give him a follow on Instagram if you’re into more pics of sweet Aussie sticks.

I’ve been told the photo above shows Owl shaping some boards during a 1977 visit to Torquay. I spent an appalling amount of time going through the Australian National Surfing Museum’s Facebook page to try and find the original version of the photo, but didn’t have any luck. Nonetheless, it’s clear that Chapman not only visited Australia multiple times, but also shaped boards during this time. Surf Research notes that Chapman shaped boards for Goodtime Surfboards during pit stops in the Seventies. The Vintage Surfboard Collectors group on Facebook has a couple of cool examples of Goodtime boards shaped by Owl. Here’s a ridiculous Goodtime / Owl board with a Shane Egan airbrush, which I posted about on Instagram below; and here’s another insane example of a Goodtime / Owl stick.

And if you still haven’t had your fill of Owl’s Australian collaborations, the cool folks at Von Weirdos sold a sweet single fin that Chapman shaped under Terry Fitzgerald’s Hot Buttered label.

The Owl Chapman board you see here is 6’6″ x 20″ x 2 3/4″. The board’s owner estimates the board was likely shaped in 1977. I also understand this board was a little shorter than what Chapman was usually shaping at the time, but it was crafted for smaller Bells Beach and other nearby Victoria breaks.

There are numerous references to Owl Chapman and Michael Peterson taking a road trip down to Bells Beach in 1977 after MP won the Stubbies contest. Cheyne Horan mentioned the trip in a recent Tracks writeup. A commenter in the Vintage Surfboard Collectors group referred to the trip as the “Fear and Loathing trip”, and given Chapman and Peterson’s reputations, it’s likely this is a tame description of what actually transpired. Apparently MP and Chapman concluded the road trip in Torquay, where they both shaped boards at the Rip Curl factory. I can’t say whether the board featured here in the post is one of them, but it’s definitely a cool story involving two of surfing’s all-time great characters.

I was able to find exactly two other Owl Chapman Underground Rip Curl surfboards. One is a wing pin on the Vintage Surfboard Collectors Facebook group; the other was featured on Facebook Marketplace. I have reproduced the photos of the Marketplace board above. It looks like someone might have made off like a bandit with that one; as far as I can tell the board was listed for a mere $100 on Facebook somewhere in Australia.

Thanks again to Red for sharing pictures of this awesome Rip Curl / Owl Chapman single fin!

Photo at the top of the page by Peter Crawford and found on Cargo Collective.