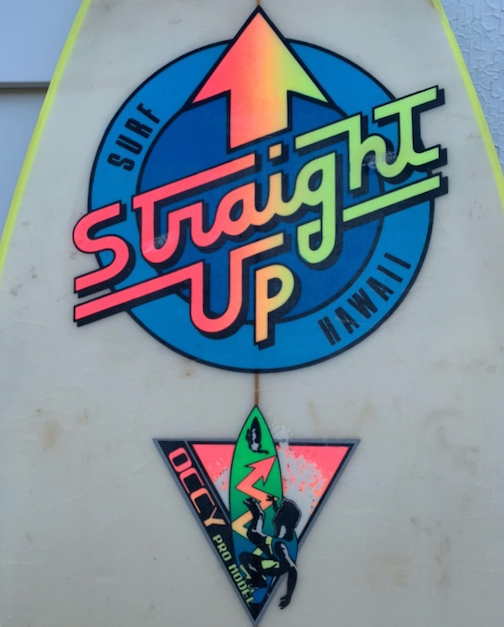 Greetings, Shredderz! I don’t know about the garbage bins near you, but apparently parts of New Jersey have trash cans overflowing with incredible vintage surfboards. Thanks to Tom on Instagram for sharing the photos of this beautiful Straight Up Occy Pro Model, which, unbelievably, was a trash find. In fact, I just might head out of the house and dig around some dumpsters and see if I can come up with a Channel Islands Tom Curren model.

Occy is probably best known for his association with Rusty Surfboards, especially during the mid-Eighties, at the height of his rivalry with Curren. I’m not sure when Occy parted ways with Rusty. As a side bar, I find it interesting that Occy never re-joined the Rusty stable, other than a recent limited edition re-issue of his classic Eighties thruster, which was produced in conjunction with Billabong.

Straight Up Surfboards produced the Occy Pro Model during the early Nineties, and perhaps even earlier. As is usually the case with surfboards, it’s hard to find reliable information on specific dates. That said, 1992’s “The Green Iguana”, released by Billabong and directed by Jack McCoy, features Occ with a Straight Up stick on the cover.

More importantly, though, the film includes a section of Occ putting on a backhand surfing clinic. Did I pause this video a million times to see if Occy was surfing a Straight Up Pro Model? Sadly, the answer is yes. Even sadder, I still don’t know the answer.

Judging from a post on Straight Up Surfboards’ Facebook page, the label was founded in Hawaii in 1983, by Kaui Hill and Dave and/or Kim Purington. I’ve featured a Straight Up Surfboards stick on this blog only once before, and that was a beautiful channel bottom thruster shaped by Mike Croteau. It looks like Straight Up is still producing boards today.

The Occy Pro Model you see here measures in at 6’4″ x 19 1/4″ x 2.5″. It was shaped by Carl Schaper, who is a longtime North Shore craftsman. Schaper also shaped the board that can be seen on the cover of The Green Iguana — you can clearly see his logo beneath the Billabong laminate. (Shameless plug alert: Schaper was an early mentor to Todd Pinder, whom I featured in the inaugural Shaper Spotlight entry a few months back.) I love the fact that the airbrush on the board is almost identical to the one on the Occy Pro Model laminate. And the fact the laminate features Occ going vertical on his backhand is another nice touch.

The board in question was clearly shaped by Schaper himself. Apparently someone else reached out to Schaper for info on the board. Schaper couldn’t recall whether or not the board had been shaped for Occy as a personal rider. Even if the board is a stock model, I think we can all agree that it’s still a ridiculous score!