Tails of the Thruster: Sagas of Shred 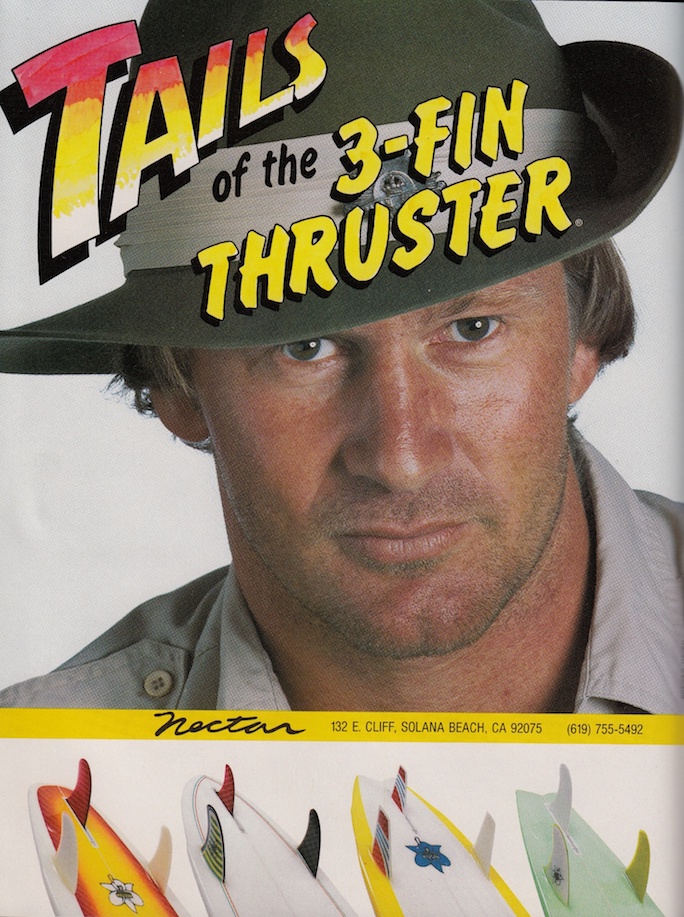 Greetings, Shredderz! Buckle in for another scorcher of a vintage surf advertisement. As a quick reminder, I scan a different surf ad every Thursday evening (California time, of course) as part of the Sagas of Shred series. I have a fondness for ridiculous Eighties ads, but usually I can only get in about one or two jokes, max, before I realize that my affection for the ad isn’t ironic after all. I’ve seen different scans of this ad floating around the internet somewhere, although I can’t seem to find them. What you see here is a Simon Anderson / Nectar Surfboards ad that originally appeared in the May 1983 issue of Surfer Magazine (Vol 24, No 5). Anderson, of course, created the tri fin thruster design nearly forty years ago, and it remains the de facto fin setup for countless surfboards across the globe. I can only guess the magnitude of his invention hadn’t yet become apparent by the time he decided to pose for a half hearted Indiana Jones spoof. Nectar Surfboards, based out of San Diego, was the American licensee for Anderson’s boards. I don’t believe Simon shaped any of the US boards, but I’m not totally certain on that point. What’s interesting about this ad is that it also includes a closeup of some very cool and varied designs that were part of Nectar’s lineup at the time. From left to right there’s a standard Eighties bump squash tail; a wing round pin (not sure if that’s the precise term); and two swallow tail varieties. There’s also an interesting variety of fin sizes and shapes. You’ll notice some of the boards have smaller center trailing fins, whereas others have three fins of equal sizes. I’m not sure what to call the fins on the white and yellow board second from right, but they’re reminiscent of the trapezoidal fins currently found on some Vulcan Surfboards. This ad is definitely one of my favorites in terms of sheer ridiculousness, but, as is usually the case, it isn’t long before I find myself getting genuinely excited about the boards and the people that are featured.