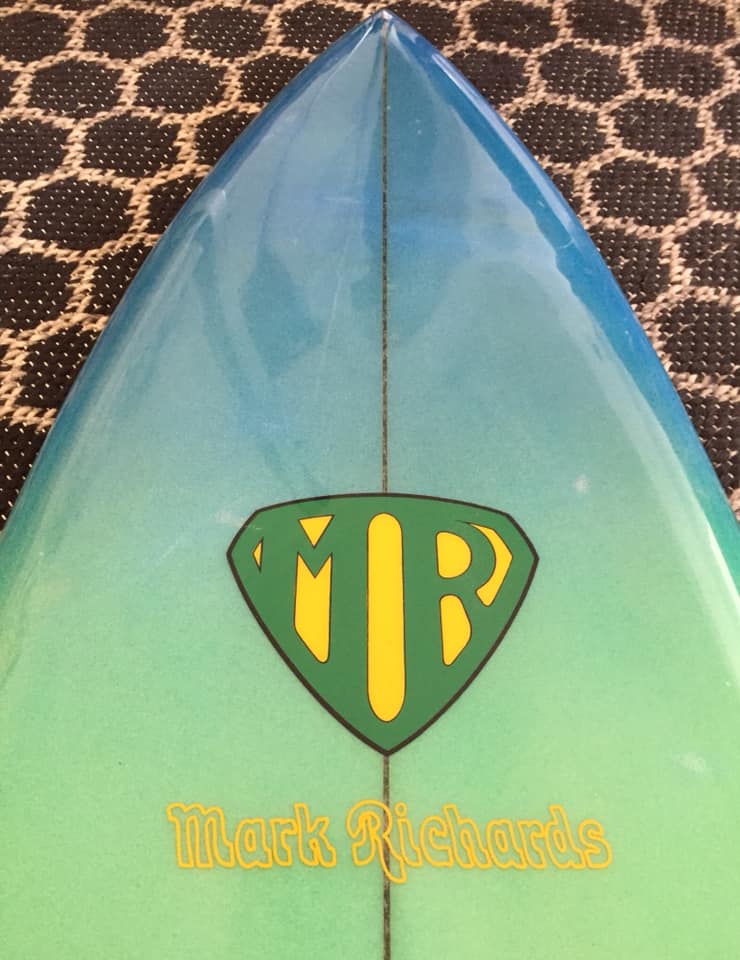 Greetings, Shredderz! We’ve got a quick hit for you tonight, but one that I think is still very much worth your valuable time. I originally saw this US-made Mark Richards twin fin on the awesome Vintage Surfboards Collectors Facebook group. You can find a link to the original post here. It’s a private FB group, but given that I’m a member, you know there aren’t any real standards. The board’s owner was kind enough to give me permission to run the pics here on the blog.

The board measures in at 5’10” and it was shaped sometime during the Eighties. I absolutely cannot get over the gorgeous airbrush on this thing! Is it me or are gradient airbrushes not nearly as popular as they used to be? And I can’t help but admire the way the color scheme is echoed in the laminate. The fins are a newer reproduction, but they look beautiful on the board.

Even better, the owner was able to contact Robin Prodanovich, who was one of Gordon & Smith’s production shapers at the time. (Side note: Prodanovich’s son, Todd, is an editor at Surfer Magazine.) The US-license MR boards were shaped out of the G&S factory in San Diego. Prodanovich had the following to say about the board:

There were other shapers besides myself, that shaped the MR twins and single fins at G&S. I did the bulk of them, but Hank Warner, Terry Goldsmith, Hoy Runnels, and Mike Richardson did their fair share. Larry Gordon would not allow any of the shapers to sign their shapes, so each guy had his own secret way of “signing” their work. I always placed a pencil dot between the numbers that indicated length, so a 6’2” length would be indicated as 6.2, and the dot would be raised to about the centerline of the numbers. I don’t recall how the other boys did theirs. Eventually Larry gave in and let us sign our work.

For more on this rad stick, check out the post in the Vintage Surfboard Collectors Facebook group.