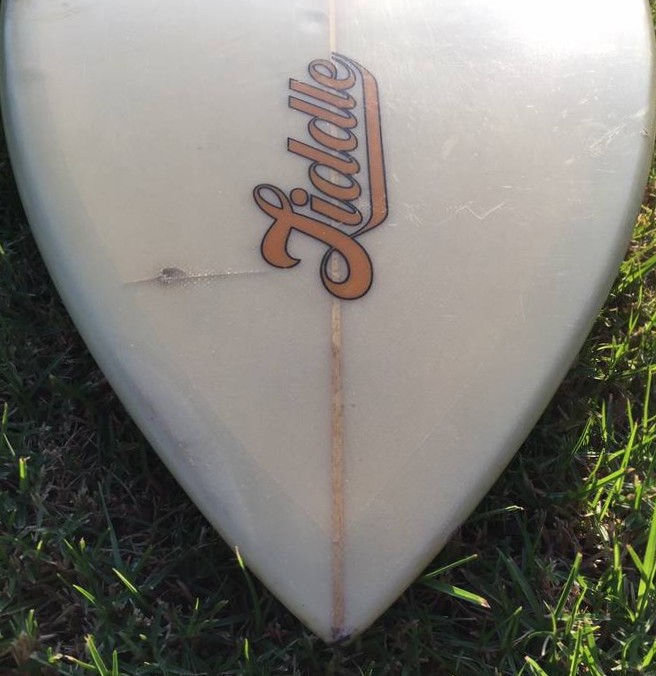 You sick of seeing these vintage Liddle single fins yet? Me neither. This gem was lurking on Craigslist in Orange County last week before the listing was taken down. I have to assume the board was snapped up by another collector.

The Liddle single fin you see pictured here measures 7’1″, and it’s far more of a traditional Seventies single fin outline than the displacement hulls that one mostly associates with Greg Liddle and his eponymous label.

The board featured in this post is similar to another Liddle single fin I wrote up a little over a year ago. For whatever reason, the orange laminates mostly appear on older Liddle boards. I’m not entirely sure why that is, but I can’t think of any post 2000s Liddle boards I’ve seen with an orange laminate.

The Liddle single fin isn’t in pristine condition, but all things considered it is in pretty good shape. The board was listed on Craigslist for $800, which seems about right given everything going on. I tend to think the hulls command a bit of a higher price than the standard single fins, but I’m down with both.

And no blog post on a vintage Liddle would be complete without some complete overkill on analyzing the signature on the board. I wrote up an Eighties Liddle hull last week, and in the post I did some analysis around the serial numbers of various vintage Liddles, as well as the dates assigned to the serial numbers per the Liddle Surfboards website.

Judging from the outline of the orange laminate board here, as well as the single fin setup, it’s almost certainly shaped in the Seventies, or maybe the Eighties. For example, see here for some similar boards from the Liddle website — single fin round pins, just like the one above — that are dated to the Seventies or Eighties. I have also heard that an X on the signature, like the one above, denotes a stock shop board (versus a custom shape).

I’m having trouble reconciling the number on this board — X-1036 — with other similar boards I have seen. For example, I wrote up a different Liddle single fin that looks like it was shaped around the same time as X-1036, and the other board has X-142 written on the stringer. I have reproduced the photos below.

First, I’m not quite sure why the “X” boards are numbered differently. As a reminder, the hull I wrote up last week had the serial number #3070; and before that, I wrote up a single fin with serial number #3249. But even looking strictly at the X boards, I have hard time thinking those numbers are sequential. In other words, I can’t imagine that there are nearly 1,000 boards that were shaped between X-142, the board immediately above; and X-1036, the orange laminate single fin that is the subject of this post.

If you’re a Liddle-ologist with more insight into how Greg numbered his boards, I’d love to hear from you. Otherwise, I hope you enjoyed the pics of this neat vintage Seventies Liddle single fin.