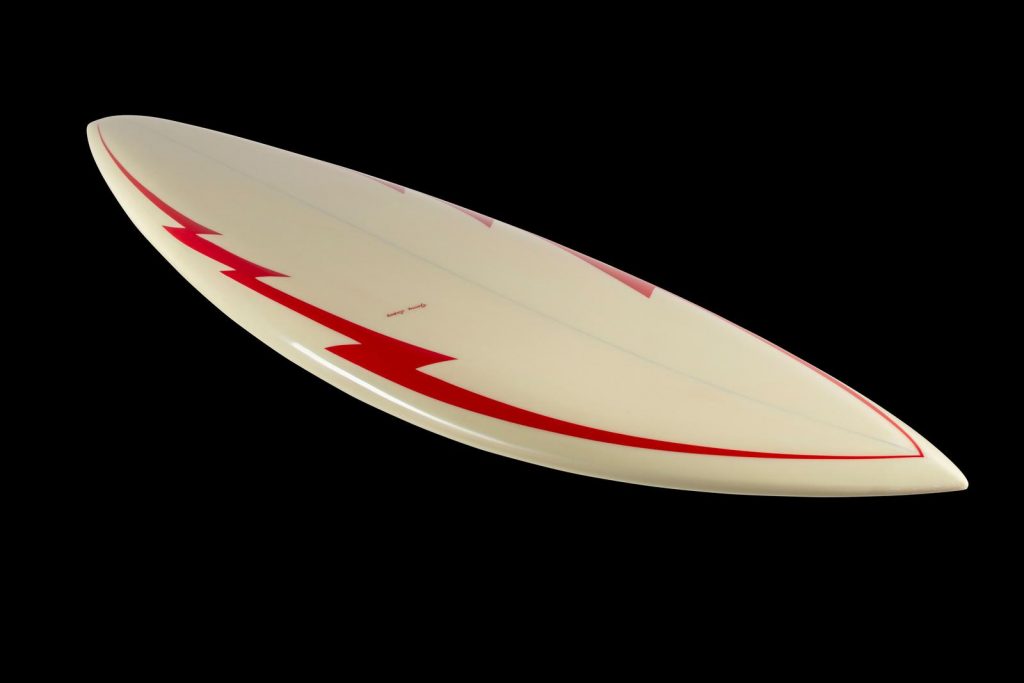 I was curious about the auction for a number of reasons. First and foremost, Lightning Bolt is still likely the most famous surfboard label ever. The brand’s enduring popularity is remarkable. This isn’t exactly an original point of view, but Lightning Bolt is classic for all the right reasons. The brand boasts an iconic logo, an incredible roster of shapers and an equally talented team representing some of the most famous folks in surf history.

Secondly, I was also curious to see what kind of prices these Lightning Bolt surfboards would fetch. This is particularly true given that California Gold was experimenting with a new auction format for the first time, with a lineup exclusively made up of Lightning Bolt sticks, versus the usual, varied selection.

A lot of the boards ended up selling for less than the expected prices listed alongside each piece. I’m not sure why that’s the case. I think pricing surfboards is difficult, period. There is an incredible amount of variance between individual boards along numerous attributes: color, condition, dimensions, etc. Add to that fact that boards are somewhat illiquid — how many Bolts are publicly sold every year? — and you have a recipe for inconsistent pricing.

That said, while it’s interesting to talk prices, that’s not why we’re all here. At the end of the day the Lighting Strikes auction had a really nice collection of Seventies Bolts, covering a number of notable shapers. Below you can find some of my favorites. These aren’t necessarily the most well-known or most collectible boards, but the ones I thought were cool.

Well, this one blew it out of the water! This wasn’t my favorite board, per se, but covering the auction without mentioning the sole Lopez in the lot would be like writing about the Chicago Bulls in the Nineties without mentioning the words “Michael Jordan.” What I really love about the listing is that they show the condition of the board before and after. You can also check out the super clear signature on the board, too. My general rule of thumb — which I do not claim is infallible — is that it’s a really Gerry hand shape when he signs his name on the stringer in call caps, just like the photo above. (Here’s another blog post on the topic.)

This Tom Parrish-crafted missile was one of the two unrestored boards in the entire auction. The other was an original, gorgeous “California Bolt” shaped under license at the Hobie factory, by either Terry Martin or Mickey Munoz. I really don’t mind an older board that shows some of its age. The Hakman Parrish logo with the two palm trees is a favorite, and the details on this board are so killer, whether it’s the gorgeous original fin or the nice triple stringer setup. Apparently it’s unclear if the black resin pin lines were added after the fact, but count me among those who aren’t bothered at all by this.

I’ve had a long fascination with Mike Diffenderfer‘s shapes. As is the case with the Gerry Lopez board above, you can see the before and after photos of the board’s restoration process. This is true of a number of boards listed for sale at the auction site, and I definitely recommend checking it out. Anyway, in my humble opinion there are few surfboard designs as beautiful and pure as the winged pintail single fin, and this Diffenderfer delivers in that regard.