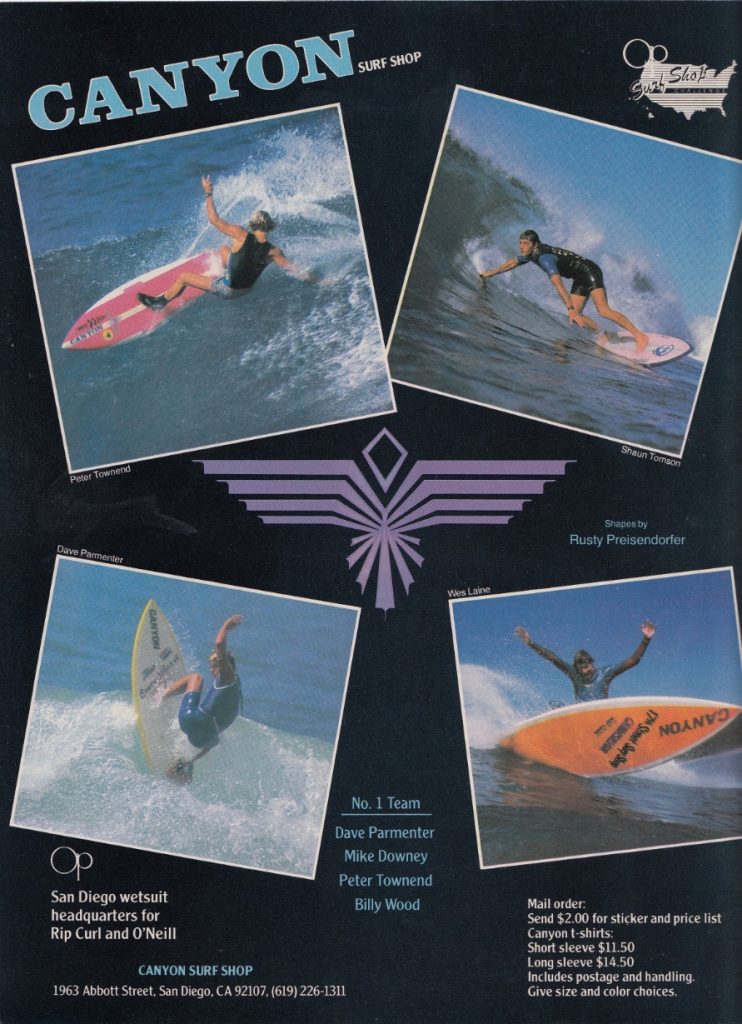 Greetings, Shredderz! It is Thursday evening, so as is customary around these parts, we’re serving up a fresh scan of a vintage surf ad. This time around we have an advertisement that originally appeared in the April 1984 issue of Surfer Magazine (Vol 25, No 4). But we also have an example of a rad Canyon Surfboards stick — shaped by Rusty, natch — which we’ll get to in a bit.

I love learning about the early labels of various shapers’ careers, whether it’s Shawn Stussy cutting his teeth at Russell Surfboards, Gerry Lopez’s stint at Surf Line Hawaii, or countless others that I haven’t covered yet. Rusty Preisendorfer had established himself as a top shaper well before he established the eponymous brand that would make him something of a surf mogul. By the early Eighties, Rusty had already shaped boards for world champs Peter Townend and Shaun Tomson.

There’s a comprehensive San Diego Reader article that has a nice profile of Rusty and his early shaping career. According to the article, Canyon Surfboards was a collaboration between Rusty and his longtime glasser, John Durward. Durward owned Canyon Glass, which glassed most of Rusty’s shapes, and at some point the two men went into business together. Later on Canyon Surfboards would become the official licensee for Shaun Tomson’s personal line of shapes.

You’ll notice the ad features Peter Townend, Tomson and Dave Parmenter, among others. The sheer number of surfers Rusty has shaped for during his long career is mind-blowing, not to mention his role informally tutoring folks like Parmenter, who has gone on to become one of the foremost authorities in building surf craft.

There also happens to be a nice and clean Canyon Surfboards twin fin listed for sale on Craigslist in the Bay Area. You can find the listing here. I really the Canyon Surfboards label, which Rusty designed himself, having majored in visual arts at UCSD.

The board was shaped by Rusty, as clearly indicated on the signature, and it has a neat pair of Star System fins, complete with an Eighties-appropriate checkerboard print.

Even after all the accolades and the decades spent in the surfboard industry, I suspect Rusty might still be underrated. At the very least, I’m a little surprised that there isn’t more attention around Rusty’s earlier boards, whether they were shaped under the Canyon Surfboards and/or the Music! labels. That said, I think Rusty is easily considered one of the greatest living shapers in California, and at some point I wouldn’t be surprised if there’s a renewed interest in the shapes he produced towards the beginning of his career.