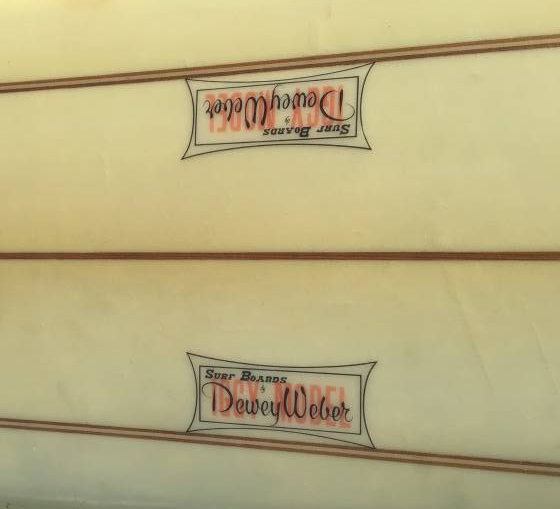 The Iggy Model you see here was posted to Craigslist recently. All the photos here are via the original Craigslist post. The original post has since been taken down, but there’s another post from the same seller offering a bunch of cool Sixties longboards.

I’ve documented a few of Ige’s shapes before here on the blog and Instagram, but both of the boards were for Ige’s The Surfboard Shaping Co label. The Dewey Weber Iggy Model is a classic longboard, and I thought it was worth documenting given that there aren’t too many photos of the board available online.

The seller was also kind enough to post some cool close up shots of the fin, one of which you can see directly above.

I was able to find a few other Dewey Weber Iggy Model boards online, one of which can still be found on Jamboards. It’s interesting to note that the Jamboards Iggy Model has a very different fin. The blue fin board also has double laminates on either side of the center stringer; the Jamboards example has a competition stripe and one laminate. See below for photos of the Iggy Model on Jamboards.

Surfing-Waves.com has photos of another Iggy Model with a blue fin that is similar to the fin design on the Craigslist board. The Surfing-Waves board also has the same dual-laminate setup.

Davenport Surfboards also has a cool writeup of another Dewey Weber Iggy Model, with some valuable information on the design of the board itself. Here’s what Davenport had to say about the Iggy Model:

Back in the 1960’s the Iggy model was way ahead of its time featuring an “S” deck profile, 60/40 rails in the tail and the famous scoop rocker that most 1960’s era Webers are famous for.

I can’t verify these details, but I tend to trust the description. I wish I had more details on the Iggy Model, but info is scant. Weber’s current webpage mentions the 1967 Iggy Model in a way that makes me wonder if there was something special about that particular board. At the very least, comparing the Jamboards example to the one featured at the top of the page, it seems like there were two separate fin designs. If you know more don’t hesitate to share!