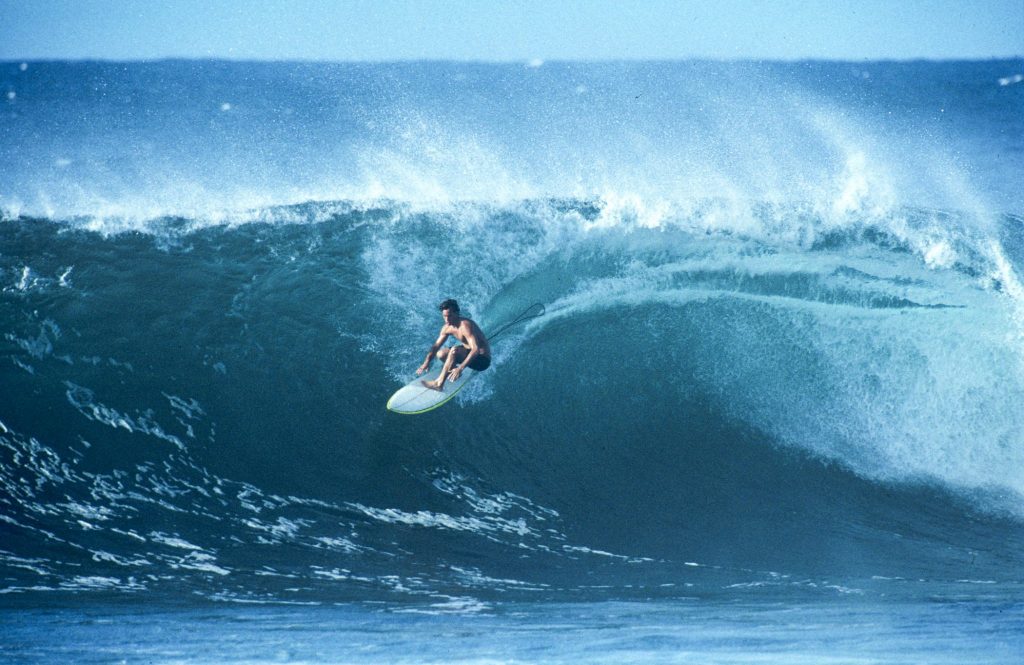 Greetings, Shredderz! Hope you are all enjoying the last few days of the decade. I can’t think of a better way to say goodbye to 2019 than by checking out some sweet sticks, so without any further ado, here are some of my favorite social media posts from the past month or so.

Stab Magazine called Tom Curren’s Maurice Cole-shaped reverse vee “the most famous board ever shaped”, and it’s hard to argue with that description. The Surfer’s Journal recently weighed in with some cool trivia, letting us know that there were two boards with the signature yellow rails and logo-less design: a 7’3″, along with the more famous 7’8″ featured in Servais’ timeless cutback photo. The existence of the nearly identical 7’3″ and 7’8″ boards is described at length in the Stab Magazine article linked in the first sentence of the caption.

Here’s where things get weird: in last month’s Social Media Roundup I featured an Instagram post from Maurice Cole himself, posing alongside an 8’0″ board with the same reverse vee, yellow rails and blank logos. Cole also claims the 8’0″ was shaped in 1991, along with the 7’3″ and 7’8″. Does this mean there are actually three reverse vee boards, and not two? I figure if anyone knows it’s Maurice Cole, but consider me intrigued.

Rob Machado is a Pipeline Master, he gets paid to travel the world and surf his brains out, and he’s also got phenomenal hair. If you find yourself running out of reasons to be jealous of the dude — who, by all accounts, is a super nice guy — he also gets Skip Frye boards for Christmas. This one is a beautiful 7’11” Frye Nozzle.

Speaking of things I’d like to see under my Christmas tree, add a Marc Andreini balsa Serena model to the list. My 9’0″ Andreini Serena is probably my favorite board of all time. You can see Marc posing alongside a different board in the picture immediately above this caption — note the White Owl logo on the deck, whereas the first board doesn’t have any logos. The logo-less Serena is actually a gift to the woman whom the board was named after, which makes it even cooler.

There’s no special significance to this shot, which was taken by multi-hyphenate Andrew Kidman. It’s just a gorgeous photo of a skilled craftsman that highlights the beauty and skill of hand shaping surfboards. RIP Allan Byrne.

The Campbell Brothers have been featured in the Social Media Roundup countless times now. They always have cool tidbits from their decades long history with one of surfing’s most enduring designs. Here’s an early Hawaiian quiver from 1983, featuring a trio of sweet sleds. Check out that Cafe Haleiwa logo on the far left!