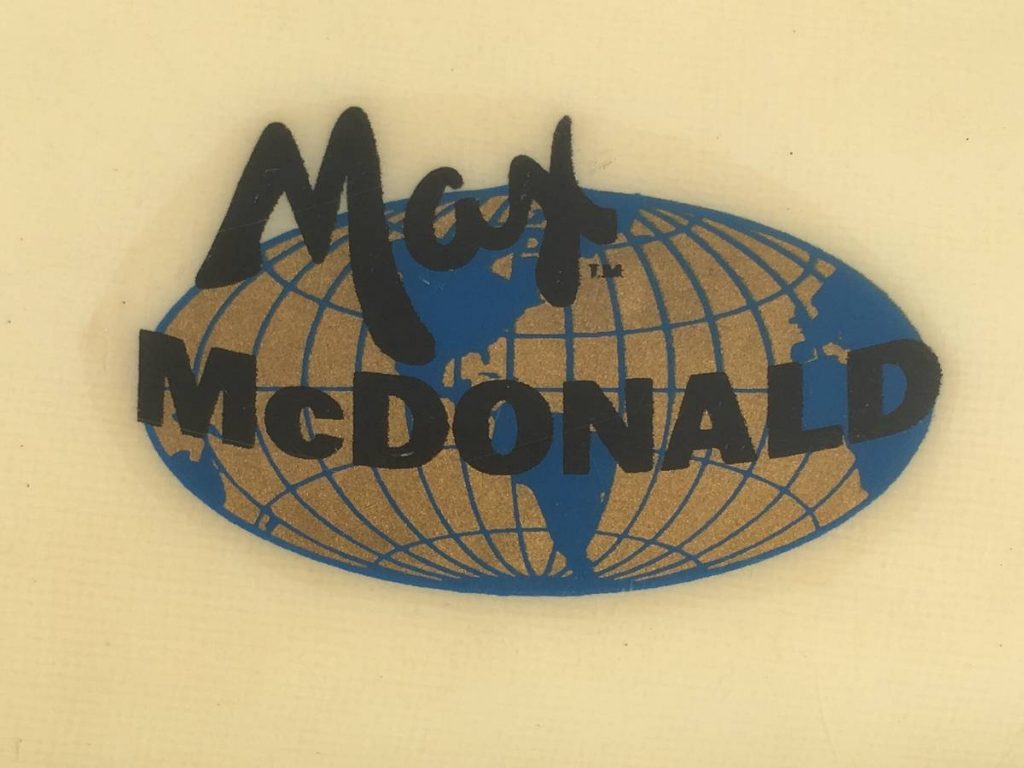 Greetings, Shredderz! Long time readers of the blog probably know by now there are few things I enjoy more than learning about influential shapers and craftsmen. This is especially true of those who aren’t necessarily household names. Today we have a sweet board shaped by Santa Barbara shaper Max McDonald. I had seen Max’s boards pop up on Craigslist every now and then, and I learned a bit more about McDonald’s career when I wrote an earlier post that featured his collaboration with the Campell Brothers. In the late Eighties, McDonald and the Campbell Brothers created a board called the EB5, which combined elements from both shapers. The E stands for McDonald’s elevated wing design, which was inspired by Sam Hawk and Dick Brewer’s winged boards from the Seventies; and the B5 refers to the five fin Bonzer shape invented by the Campbells.

The board pictured above is a Max McDonald EB5 that is currently listed for sale on Craigslist in San Diego. You can find the listing here. The board is 6.5″ x 20 1/2″ (thickness is not listed), and according to the seller it was likely shaped in 1990, shortly after the EB5 was first introduced.

The board has a ton of fascinating details. There are almost too many to list! Lucky for you, this is the best blog on the internet for over-analyzing vintage surfboards.

First, you don’t see a ton of non-Campbell Brothers Bonzers, especially from this era. I’m guessing that McDonald produced the EB5 under his own label, in addition to the boards that he shaped alongside the Campbell Brothers.

You can clearly see the elevated wing design in the picture above. There are also some interesting-looking channels that seem to run up the length of the board and create something that reminds me of an exaggerated tri plane hull design.

The tail itself is also unusual. I’m not sure how to describe it — a winged thumb tail, maybe? Regardless of what it’s called, it definitely looks cool and futuristic, a good thirty years after the board was first shaped.

There’s quite a bit of nose rocker on the board, as evidenced by the photograph above.

If you look closely at the photos from the listing, you’ll notice there’s small “epoxy” text beneath the Clyde Beatty logo. Beatty, in addition to producing his own shapes, was known for experimenting with various epoxy glassing techniques, particularly with underground Santa Barbara shaping legend John Bradbury.

As a bonus, here’s another cool Max McDonald five fin Bonzer. It’s not explicitly branded as an EB5 but it has the same fin setup as well as McDonald’s signature elevated wings. Check out the tail on this board, too.

I’m just blown away by all the details on this Max McDonald EB5. The longer I look at it, the more I notice, and the more questions I have. I would love to hear some background on the thinking behind the various design elements, and how they effect the actual ride of the board. Overall the EB5 strikes me as the product of a very detail-oriented and creative shaper, and if nothing else, it’s fun to look at. Oh, and the price is right too: the seller is asking $150 for the board. Here’s a link to the listing if you’re in the market.