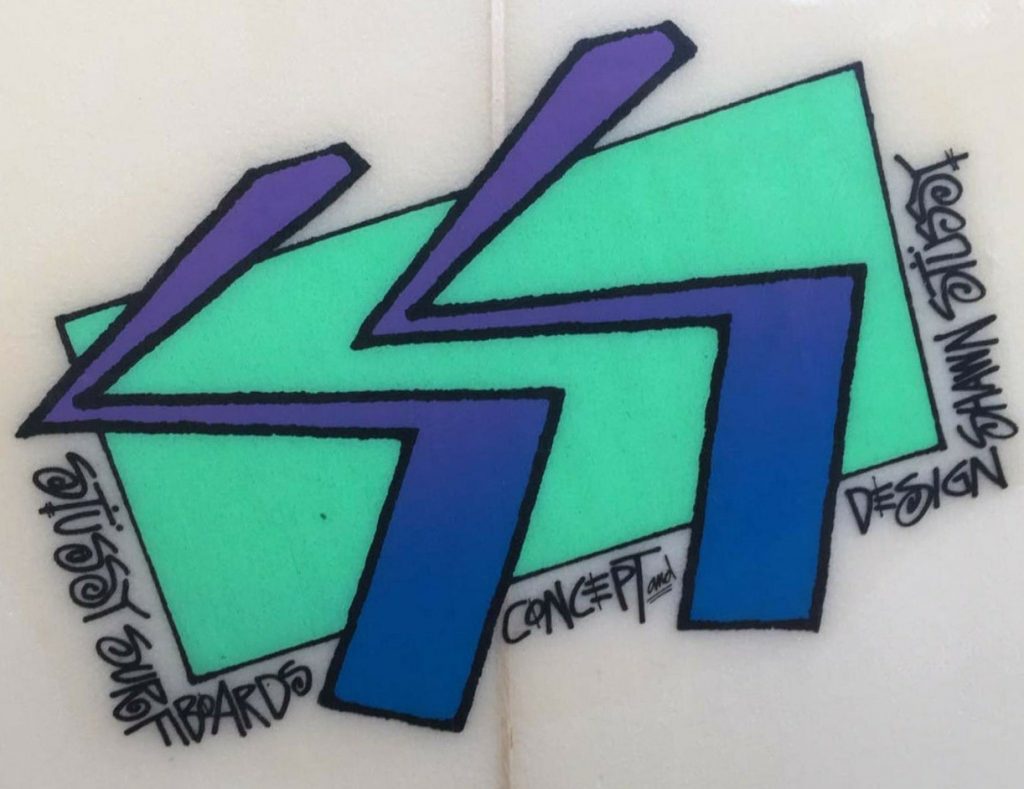 Greetings, Shredderz! If you’re a regular reader of the blog then you may already know that we like to examine Stussy surfboards at a level of detail that’s usually reserved for ancient texts and Renaissance art. It’s weird, I know. But hey — there’s a sweet Stussy surfboard for sale on eBay, and I don’t want to let anyone down by not giving it the usual Shred Sledz treatment.

The board is quite clearly a Stussy surfboard, but I believe it was actually shaped by Terry Martin. More on that later. In the meantime, the thing I dig most about the board is the artwork. Stussy is known for decorating his surfboards with tons of elaborate logos. This is but one of the many reasons they remain popular today.

The Stussy surfboard pictured above is a 6’6″ thruster, and I believe it was likely shaped in the late Eighties or early Nineties. I got the photos from the eBay listing, which can be found here. Don’t quote me on this one, but I want to say both the Double S Crown logo and the Rasta-inspired artwork can be found in “later” Stussy boards, versus ones from the early- to mid-Eighties.

The sheer amount of logos on the board might be overkill for some, but definitely not me.

What I love most are the tiny drawings sprinkled throughout. The martini glass logo you see above is small compared to the rest of the artwork on the board, but I like it just as much (if not more) than the more recognizable laminates.

And yes, even the glass-on fins have logos on them. I also love the stylized hand done lettering and Stussy’s inimitable copy: “Built for Those Livin'”, “When Itz Time to Relax”, “Positive Vibration Inna Rub a Dub Style”, etc.

This shit is art. Now, look: Shawn Stussy’s career certainly doesn’t need my stamp of approval. But I’m almost annoyed that his surfboards aren’t more valuable. The board you see above has been floating on eBay for over a week with no bites. And yet Kim Jones and Dior just based their latest collection on Stussy’s hand-drawn lettering, and vintage Stussy clothing is prized by collectors and streetwear aficionados. Even if the board wasn’t shaped by Stussy, as I suspect, I can’t believe that it can be had for less than $800. That’s a lot of money for a surfboard, I know. But how is this not modern art? What’s the difference between this board and, say, a pair of Stussy-designed Nike Dunks, other than the fact the sneakers cost $500 more? Now, I’m not buying it myself, so you would be justified in telling me to put my money where my mouth is. That said, I look at this surfboard and think of it as a unique creation from a notable artist. (I took exactly one art history course in college, so you’re not dealing with an expert here.) All that aside, though, the board and all the artwork look awesome, and I’d love to have it on display even if I didn’t surf.

It’s also worth mentioning that I believe the board was shaped by Terry Martin, and not Stussy himself. Martin is definitely no slouch himself; Surfer Magazine once estimated that he shaped more than 80,000 boards in his long and prolific career.

Here’s why I think the board was shaped by Martin. In the photo above you can see the laminate says “Design Concept Shawn Stussy.” I interpret this to mean that while Stussy “designed” the board, it wasn’t actually shaped by him. I have anecdotally heard that as the clothing brand began to pick up speed, Stussy shifted the surfboard production to Terry Martin. I don’t have proof of this, but I think there’s some good evidence suggesting the board wasn’t shaped by Stussy, at a minimum.

I say this because Stussy clearly signed many of his earlier shapes. See below for a few examples of some Stussy signatures.

The board pictured above is an Eighties Stussy thruster which I found on Surfboard Hoard. You can clearly see the signature, which appears to have been drawn by hand and in pencil. I believe it is under the glass as well. Note that it’s a signature and not a laminate or a logo.

Here’s another example of a Stussy signature, from an earlier board I wrote up, which remains one of the coolest Stussys I have ever seen.

As a rule of thumb, I don’t consider a board to be hand shaped by Stussy unless there is a clear handwritten signature on it, often in pencil and beneath the glass. Even so, it’s hard to put hard and fast rules in place, and I’m sure there are some exceptions floating out there.

You can check out the Stussy board on eBay here.