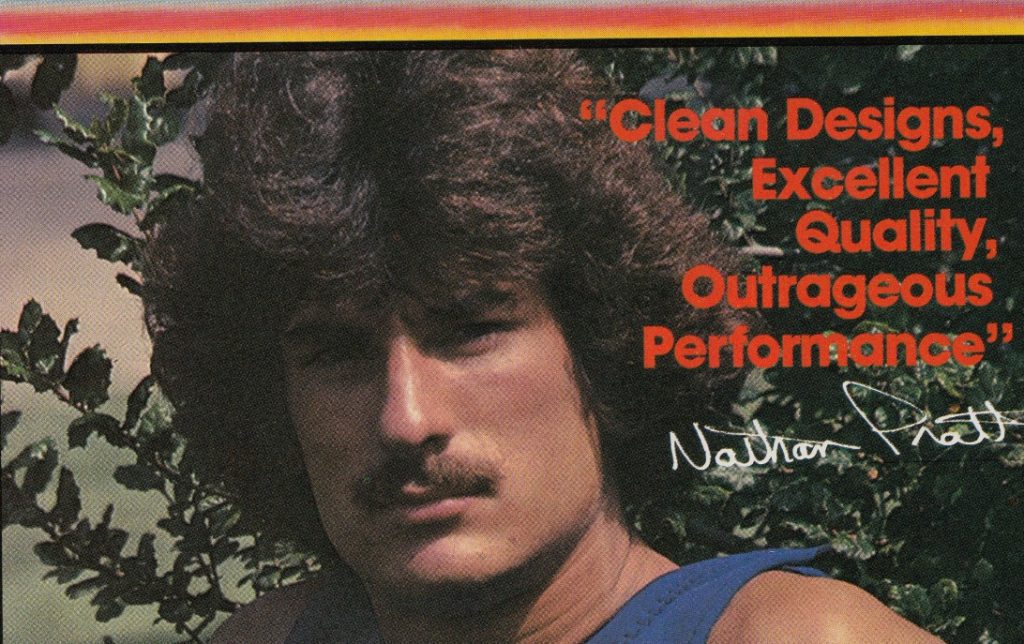 Greetings, Shredderz! For today’s Sagas of Shred entry we have not one but two ads featuring Seventies LA fixture Nathan Pratt. Both ads also feature legendary labels of yesteryear.

First up we have a Body Glove advert from the June 1979 issue of Surfer Magazine (Vol 20, No 6). Look, I know this is ostensibly a vintage surfboard blog, but I gotta say what we’re all thinking: who knew Nathan Pratt had such a spectacular head of hair? That’s not even counting the mustache, by the way. I say this about all of the old vintage wetsuit ads I write up, but I love the wetsuit itself. That original logo with the old font on the white background would look great on a t-shirt today. The side panels on the suit are another unmistakable Seventies touch.

The second ad, scanned from the same issue of Surfer, finds Nathan Pratt in a more familiar pose: about to deliver another slash to an unsuspecting Malibu wall. From what I can gather, Horizons West was a Santa Monica surf shop that was part of the extended Zephyr universe. Pratt was a Zephyr Surfboards team rider. At some point Pratt went on to shape and ride for Horizons West, but I’m not sure when. I don’t know if Pratt is still shaping boards today, but judging from his LinkedIn profile, he has remained quite busy over the years.

One final bonus: if you look closely at the Horizons West ad, you’ll notice the photo was taken by none other than CR Stecyk III. It’s not every day that you see a small surf shop ad featuring the work of a famous American artist, but this would be the exception.

Thanks for reading and we’ll be back in a week with more vintage surf ads, courtesy of Sagas of Shred!