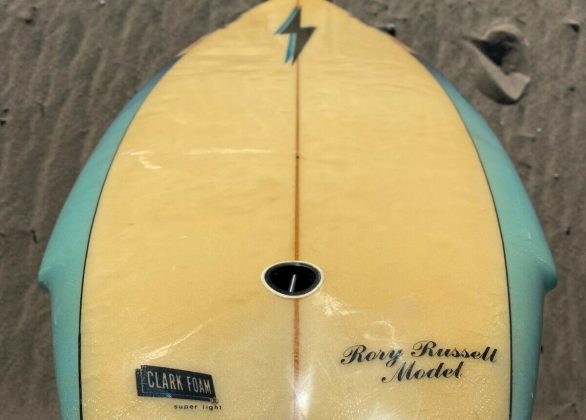 Greetings, Shredderz! There’s been a lot of coverage lately on this humble little blog about Lightning Bolt Surfboards — and for good reason, considering Bolt is likely the most famous surfboard label of all time. Today we’re back with even more Bolt coverage, as there’s a sweet Lightning Bolt Rory Russell Model that’s currently listed for sale on eBay. You can find a link to the board here.

The Lightning Bolt Rory Russell Model twin fin pictured above is 5’10”. According to the seller, it is in all-original condition.

I’ve seen a variety of Lightning Bolt Rory Russell Models, ranging from single fins all the way to thrusters. This isn’t exactly scientific, but I’d say that most of the Russell Bolt twin fins I’ve seen are not channel bottoms. I believe the Lightning Bolt Rory Russell Model was produced starting in the late Seventies and into the early- to mid-Eighties. This is based off the templates and the fin setups. I know at least some of these boards were shaped by Tom Eberly, but most of them are unsigned. See below for an example of a early- to mid-Eighties Eberly Bolt Rory Russell Model, with a 2+1 fin setup. I’m almost certain these boards were shaped in California, too.

Finally, I really dig the airbrush design that can be found on many of these Rory Russell Model Bolts.

The board on the left in the photos above was listed for sale on Surfboard Hoard; the one on the right I wrote up in an earlier post, and it was listed on eBay. Both boards are absolutely gorgeous (although probably worth noting that the one from Surfboard Hoard was fully restored). Surfboard Hoard claims Laura Powers airbrushed the board on the top left. I don’t know if Powers created this design, but as always, if you know more, don’t hesitate to get in touch.

Thanks for reading and you can check out the Rory Russell channel bottom twin fin on eBay here.