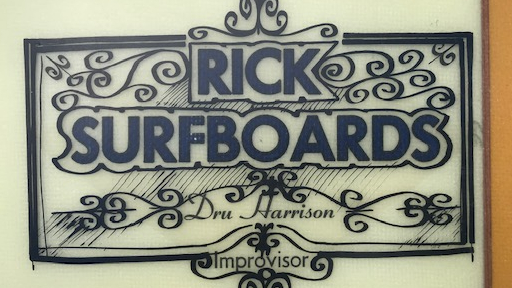 Shredderz, I hope by now you think of me as someone who is not usually prone to hyperbole. Yes, there are times when I get excited about certain boards, but it’d be weird if I didn’t, no? So trust me when I say that the Rick Dru Harrison Improvisor Model featured here is one of the cleanest examples of a Sixties shape that I have ever seen in my life.

The board you see above is an all original 1966 Rick Surfboards Dru Harrison Improvisor Model. It measures 10′ in length. I don’t have dimensions for the width or thickness, but I am told the board is quite thin. As you can see in the photos, it’s in absolutely immaculate shape. I’m told the board has a few pressure dings on the deck, but other than that it appears to be flawless.

The board’s owner tells me he showed the Dru Harrison Improvisor to both Matt Calvani and Jeff Stoner (Rick’s son), and both confirmed the board was shaped in 1966. When I initially saw the board, I just assumed it was a newer reproduction, given the insane condition.

The board also has some interesting hand-drawn artwork around the logo and on the stringer. The board’s owner had heard that it was possible the Improvisor Model was a team board. It’s speculated that Harrison’s girlfriend at the time could have drawn the artwork on the board.

I can only assume “Naumann” refers to the name of the artist who drew the artwork on the board. It’s also signed 1967. If you look closely at the close up of the laminate, you’ll notice a small “66” on the stringer. (In theory it could also be “99”, but it looks more like “66” to me.) In that case it’s possible the board was shaped in 1966 and the artwork wasn’t added until 1967.

Another reader sent me a photo of a Rick Noserider model that has almost identical artwork around the logo. I have to think the artwork on both the Rick Noserider and the Dru Harrison Improvisor were done by the same person. If you have any information on who this Naumann might be, please do let me know!

Finally, see below for an Instagram post detailing another Dru Harrison Improvisor Model. You’ll notice a ton of similarities, such as the outline and the wedge stringer. Note the board below has a modified fin, but you can clearly see the similarities between the fin on that board and the one featured here.

Many thanks to the board’s owner, who reached out and shared the photos you see here. He runs a non-profit named Don’t Litter, whose mission is to ensure our beaches remain clean and trash free. You can visit Don’t Litter’s website here for some cool merch, or just pick up the next piece of wayward trash you see after your next session.