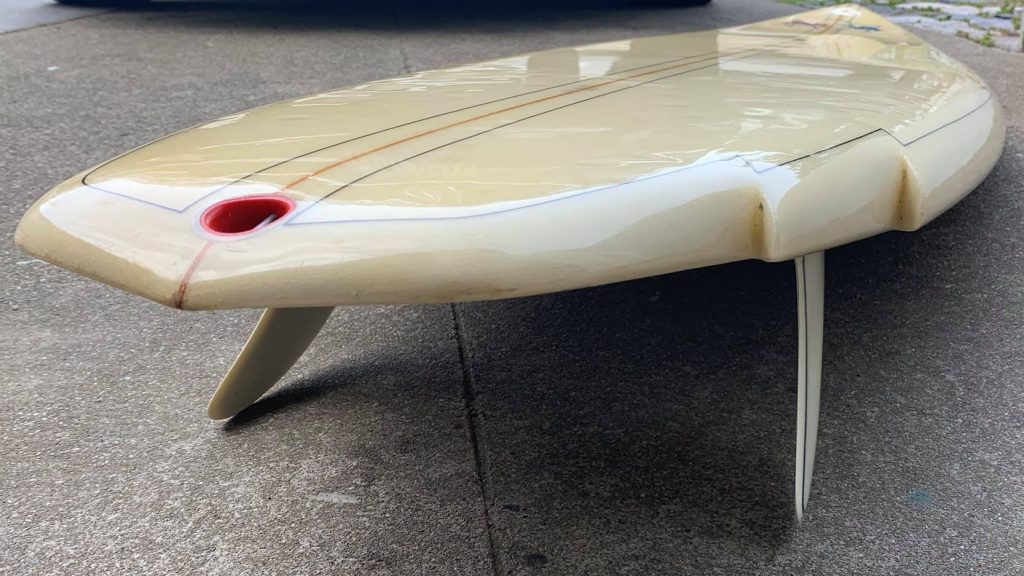 Greetings, Shredderz! Luckily for all of us, social distancing is 100% compatible with drooling over sweet vintage sleds on the internet. So even if you’re hunkered down like me, hopefully this post will make self-quarantine a little more enjoyable. Featured here is an absolutely gorgeous Ben Aipa shaped 2+1 produced under the Surf Line Hawaii label. The owner of the board originally posted these photos in the Vintage Surfboard Valuations Facebook group. He was generous enough to give me permission to run the photos in this writeup. You can follow Gary on Instagram here, and I recommend checking out the original thread, too.

I believe the board’s name and design are a reference to the fangtail boards produced during the Seventies, most famously by Australian legend Michael Peterson. MP debuted his fangtail design at the Pa Bendall Memorial Contest in 1975, riding it straight to the winner’s podium. Peterson apparently shaped only five or six fangtails. I don’t know how many of the original run of fangtails are still surviving today, but talk about grail status for any collector. MP would go on to shape modern reproductions of the fangtail before his passing. It’s still not clear to me how exactly one defines a fangtail. I frequently see double winged swallow tail single fins, often with channels on the bottom, labeled as such. By contrast, the original MP Fangtail has double wings, but then a third set, closest to the tail, that point almost downwards, ending in a pintail.

In the photo below, you can see Aipa’s Da Fang has two pronounced wings, but it ends in a wide, meaty tail. I’m not sure exactly what to call this tail design, but it’s a clear departure from the swallow tails and pintails on most fangtails. The wings on Da Fang look particularly toothy given the board’s insane 3 5/8″ thickness. I also can’t believe how well preserved the board is.

I love a good 2+1 setup, and Da Fang doesn’t disappoint. Glass on fins might not be as practical as swappable fin boxes, but they certainly are nice to look at.

Duke Aipa also posted a photo of Ben posing alongside another Fang model. I have shared it below. I’ve said it before but Aipa’s truck is so sick.

Thanks again to the board’s owner for sharing pics of this rare, beautiful Ben Aipa shape! Stay safe and hit me up if you have any vintage boards that you’d like to share.