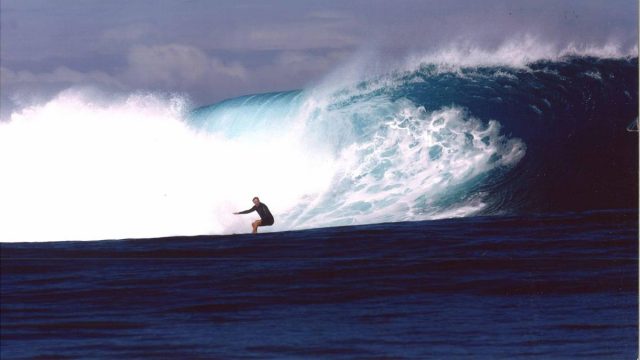 Greetings, Shredderz! Welcome to the inaugural edition of the Shred Sledz Book Club. With the ongoing shelter-in-place mandate in California, some of us have found ourselves with an unexpected amount of free time. To that end I’ve collected some of my favorite written pieces about surfing. Finally, in light of all the crazy stuff happening in the world, I recently donated to this CDC Foundation fundraiser. I hope you’ll consider making a donation to deserving people and/or organizations during these times.

William Finnegan won a Pulitzer for “Barbarian Days“, his memoirs about a life dedicated to the pursuit of good waves. Whereas a book about my surfing life would involve a lot of B minus beachbreak, Finnegan was an early visitor to both Cloudbreak and G-Land. (The photo above features Finnegan on a subsequent visit to Fiji.) Anyway, in the early Nineties Finnegan wrote a New Yorker profile of Mavericks pioneer and Northern California legend Mark “Doc” Renneker. The combination of Renneker’s larger-than-life persona and the punishing surf of Ocean Beach is a memorable one.

This is a wrenching and clear-eyed account of the last days of Andy Irons, who died alone of an overdose in a hotel room in Dallas, on the way back home to Kauai to see his pregnant wife. Melekian’s article is notable not just for its writing, but because it was one of the few stories that was willing to openly address Irons’ struggles with substance abuse, an inconvenient truth the surf industry had collectively chosen to ignore. With this piece Melekian helped rewrite the official story of Irons’ passing, and spurred a much-needed discussion around mental health in the surf media.

I’ve referenced this article countless times. It is the single best resource for an overview of all the different models Skip shapes. It also hash a ton of fantastic historical photos tracing Frye’s long and storied career. If you’re into surfboards, this is a must read.

Occy is the man. Always has been and always will be in my eyes. Regardless if you feel the same, Occ is nothing if not entertaining. This is a long and in-depth look at Occy’s life and career, from his white hot start in the Eighties, to his lost years, his triumphant World Title comeback, and now middle age.