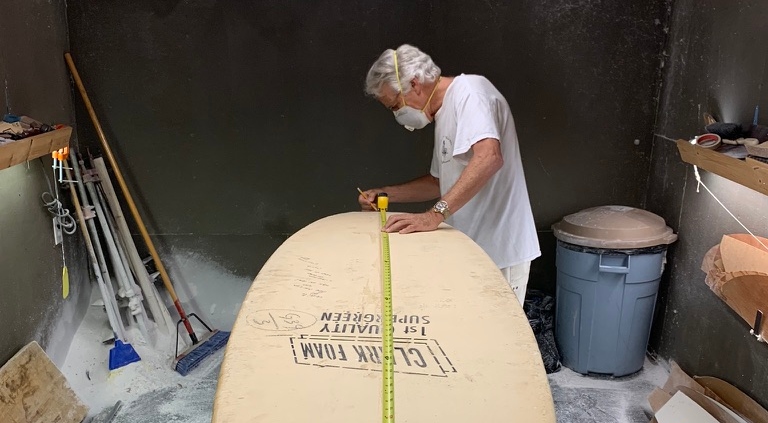 Is there anything more exciting than finally receiving a brand new, custom shaped surfboard? The question is a little ridiculous, I know — after all, the fun part of owning a surfboard is actually riding the thing — but the point still stands. What surfer doesn’t know the thrill of finally receiving a long-anticipated shape, and the endless possibility it represents?

I recently had the pleasure of ordering a custom hand shaped board from Marc Andreini. I bought my first Andreini — a 9′ Serena pintail shape — about six years ago. I had just snapped a buddy’s board that I was using at the time, and on a whim I stopped by Mollusk in San Francisco and poked around the used board rack. The guy working there made a comment about how earlier that day someone else had shown up and had promptly freaked out at seeing a reasonably priced Andreini for sale. I wasn’t sure if it was just some salesmanship jiu jitsu, but it worked, and I walked out with the Serena.

The Andreini Serena immediately became my daily driver. It’s still one of my all-time favorite shapes. Beyond all the fun it has provided, the board also became my entry into learning about surfboard design. I particularly enjoyed learning more about Marc’s approach to shaping, and the various historical influences that he integrates into his designs.

For the past couple of years I have also kept my antennae up for any Clark Foam surfboard blanks that are listed for sale. For decades Clark Foam had a near monopoly on the polyurethane blanks used in surfboard production in the United States. In 2005 Grubby unexpectedly pulled the plug on his business, sending the surfboard industry into a panic as shapers scrambled to find replacement blanks. Surfer Magazine still has the full text of Clark’s letter announcing the abrupt closure of his business. Clark Foam destroyed all of the molds that were used to create his famous blanks, ensuring that no one would be able to recreate his products. (Nowadays Clark can be found running a ranch up in Oregon.)

No one knows how many Clark Foam blanks have survived the 2005 shutdown. They are becoming increasingly rare as the surviving blanks inevitably get turned into new boards. I’ve heard stories of shapers and collectors alike hoarding Clark Foam blanks.

A few years ago I got lucky and a Clark Foam blank popped up on Craigslist. I met the seller in a Whole Foods parking lot on a rainy mid-week evening. He couldn’t have clashed more with the Whole Foods clientele, pulling up in an old van and chain smoking cigarettes, having only made this stop to get rid of the blank on his way up the coast.

I held onto the Clark Foam blank while I weighed my options. I finally decided to bring it to Andreini, given his extensive experience shaping Clark Foam blanks before the shutdown, as well as my love for his boards. Marc, along with Randy Rarick, were able to give me some great information on the blank itself, which you can see pictured below.

The blank measured in at 7’3″. This is denoted by the “73” written in green at the top left corner in the photo above. I’ve been told that the “MAR” beneath the 73 indicates the initials of the Clark Foam employee who glued up the blank. I’m not sure who this might be. The blank was also 3 5/16″ thick and 23.75″ at its widest point.

The “FS3/16BAS” text in black on the right side indicates a special stringer. The stringer is 3/16 of an inch and the BAS denotes it was made from basswood. “X1/4N” means that an additional 1/4 inch of nose rocker was added to the blank. Finally, “Supergreen” refers to the color coding system that Clark used to keep track of the weights of various blanks, which were blue, green and red. Green indicates it is slightly lighter weight than the standard Super Blue designation.

You’ll also notice some dots between the “1st Quality” and “Supergreen” lines of text. There’s a great blog post from Hobie shaper Gary Larson where he explains the placement of these dots was a quality control mechanism. The dots were an internal code at Clark that could trace the end blank back to the specific barrel of polyurethane from which it originated.

I’m not sure who might have designed the blank itself. Clark Foam periodically released catalogs that detailed the various different blank templates for sale. Clark Foam blanks were designed by some of the finest shapers in the world. For example, Rusty Preisendorfer, Renny Yater and Pat Rawson just a few shapers who contributed designs to Clark’s extensive catalog. I don’t know if my blank was a specific model, or who might have designed the original.

While it was fascinating to learn more about various Clark Foam blanks, and the specific characteristics of the blank I had purchased, the real fun was getting to watch Marc shape the board itself. Stay tuned for Part II, coming soon!