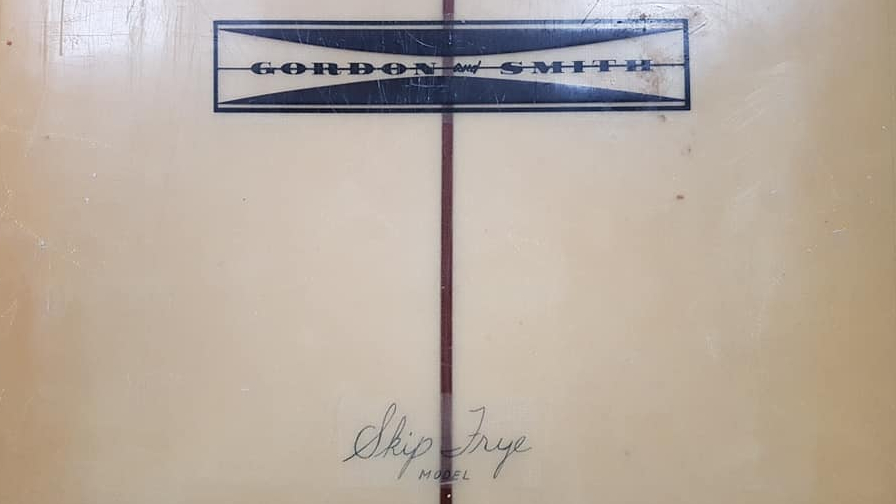 Greetings, Shredderz! If you’re putting together a short list of the most memorable surfboard logos of all time, there’s no chance you’re leaving off Skip Frye and his famous wings. Frye is also known for his longtime association with Gordon & Smith, where he was a production shaper before becoming a team rider. I’ve written up a few of Skip’s G&S models over the years, whether it’s longboards or transitional shapes. Every G&S Skip Frye Model I have seen, regardless of the shape, has always sported a pair of Frye’s wings.

The G&S Skip Frye Model you see here is an incredibly rare example, as it is one of the handful of Skip boards that does not bear his classic wings logo. The board dates to the very first run of Skip Frye Models that Gordon & Smith produced. I spoke to someone who knows Skip well, and he was able to provide some fantastic inside information behind the model. Thanks Ken for always being so generous with your knowledge.

Skip initially started as a production shaper at Gordon & Smith. After some time G&S decided to grant Skip his own signature model. As the story goes, G&S asked Skip what kind of logo he wanted for his boards, and he decided on the now iconic wing design. While the wings laminates were being printed, G&S produced an initial run of Skip Frye Models with Skip hand signing his name onto some rice paper.

You can see “No. 4” written on the stringer, which means this board was the fourth ever G&S Skip Frye Model shaped. This dates the board to late 1966. I’m amazed the board has survived intact, and as far as I know, it’s the earliest surviving G&S Skip Frye Model with the rice paper logo. Ken, who has been my go-to source for Skip info, actually used to own #19 from the same original run of boards. #19 has since been returned to Skip himself.

The board also has a fascinating back story. It was originally purchased by a sailor in the British Navy, who got it in San Diego. He later took the board back with him to England, where it still resides. The story behind the board and all the photos you see here were originally posted to the Skip Frye — 60 Years of Style Facebook Group. Thank you to the owner for granting permission to run these pics. The G&S Skip Frye Model is currently on display at Electrofish Surfboards, located in Bideford.

The board has an unusually advanced fin during an era where most longboard fins were bulkier and far more unwieldy. The nose of the board is also a bit pulled in. Later versions of the G&S Skip Frye Model sported wider noses in a response to the growing popularity of nose riding.

Funnily enough, I had actually been sent this board almost a year ago by someone who had been hoping to purchase it. I managed to nab some photos from the original listing for the board, but then someone scooped it and I lost track. When the board’s new owner posted it on the Skip Frye Facebook Group I was obviously thrilled.

Many thanks to Ken for the info on the board, and to Joshua at Electrofish Surfboards for permission to run the photos of this rare and noteworthy board.