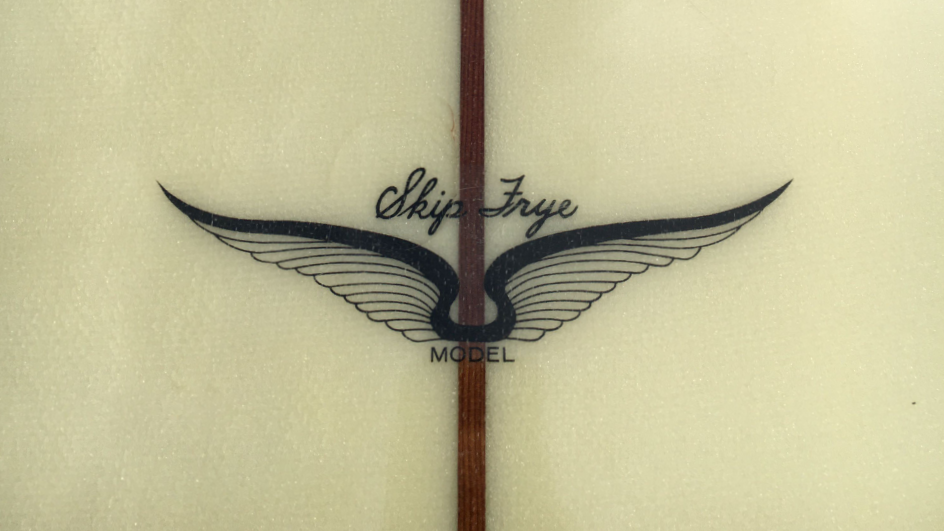 Greetings, Shredderz! For the past few weeks we’ve been lucky enough to receive pics of some killer early Skip Frye Gordon & Smith shapes. The first board is likely the fourth ever G&S Skip Frye Model ever created — so early it pre-dates Skip’s famous wings logo. The second board is a gorgeous G&S Skip Frye longboard. The third example, which you see here, is nothing short of spectacular: an all-original, 9’8″ Sixties G&S Skip Frye Model that is in stunning condition.

Calling this stick clean is an understatement. I’d happily eat off this thing! The board belongs to an anonymous collector who bought the board second hand in 1968. I can’t give away any of the details that might lead to the identity of the board and/or its owner, but I can say the board’s serial number is lower than 100. The G&S Skip Frye Model pictured here was sold somewhere on the East Coast of the United States. The name of the surf shop to which the board was originally delivered is written in pencil on the stringer.

Needless to say, I was absolutely frothing when I first saw the pics. The board’s owner has assured me that it’s not perfect. Apparently there are some pressure dings on the deck and a small discolored repair. Regardless of what might not have been captured in the photos, this is definitely one of the cleanest examples of a G&S Skip Frye board I have ever seen.

Like the pre-wings G&S Skip Frye Model I recently wrote up, the board featured here seems to have more of a pulled-in nose.

Contrast the photos above with the picture of a different Skip Frye G&S Model below. The board below was sold at auction a while back; you can find a link to the auction listing here. You’ll notice the G&S Skip Frye Model below has a few notable differences, including a W.A.V.E. Set fin box, and what to me looks like a slightly wider nose. If you recall in my earlier post about the wings-less G&S Skip board, at some point the Skip Frye Models received wider noses, in response to noseriding’s growing popularity.

The aforementioned wings-less board, which is numbered #4, was shaped in late 1966. Based off this data point, my estimate is the Skip Frye Model in this post is shaped in early 1967, given its <100 serial number. The auction board pictured above is also dated to 1967, but I think it was likely later on in the year, given the fin box and what looks to me like a wider nose. Both the featured board and the auction board are 9’8″. It’s interesting to see the subtle differences and the progression of these designs.

I’m still in a state of disbelief over the condition of this board. It’s no secret that Skip’s boards get collectors whipped into a frenzy whenever they surface, but I have a particular soft spot for boards with this kind of historical significance. Thanks again to the private collector who reached out, giving me the opportunity to share this truly special surfboard with all of you.