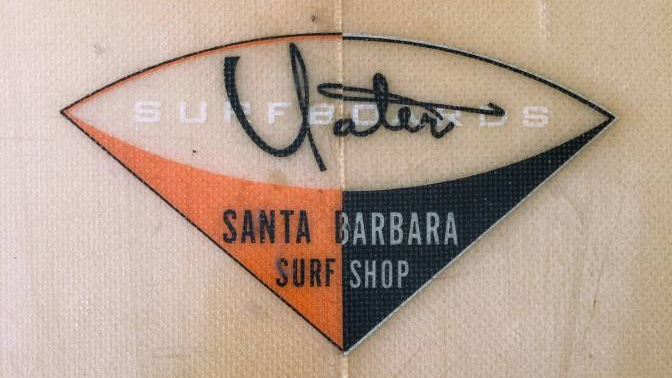 Greetings, Shredderz! While I’m an equal opportunity surfboard aficionado, I have to confess I have a soft spot for the great state of California and its craftsmen. I remain amazed at the variety and density of surf culture packed into the roughly 200+ miles of coast between San Diego and Santa Barbara, which doesn’t even count Central and Northern California. But even amid the stiff competition, I think we can all agree that Reynolds “Renny” Yater is one of the Golden State’s all time greats. There is a timeless quality to Yater’s boards. His famous Spoon model endures a good fifty years plus after its creation, functional as ever. That said, like every other board maker active during the Transition Era, the late Sixties saw Yater produce a number of short-lived experimental designs. Keep reading for a cool example of an unusual Transition Era Yater surfboard.

The board you see above is a late Sixties Transition Era Yater shape. The outline, the length and the fin are clear indicators that the board was created while the shortboard revolution was in full swing. It’s a fascinating board, if for no other reason than it bears little resemblance to the classic single fins and longboards for which Yater is best known.

The Transition Era Yater was recently listed for sale in California, but the listing has since been taken down. According to the seller’s original description, the board measures 7’10” in length. The width given was 28″, but that is almost certainly a typo. The serial number on the board is #9428.

As luck would have it, a friend happens to own a Yater single fin with the serial number #9429. Thanks to Jesse for providing pics of Yater #9429, along with the original order form. (For more on Jesse’s quiver, check out this writeup on John Bradbury’s Creative Freedom label, featuring some of Jesse’s boards.)

First, the order form for #9429 tells us the board was shaped on or around August 24 1968. A lot of times dating a board boils down to guesswork, but it’s so cool to see some documentation. The order form is in amazing shape considering it’s over fifty years old.

By that same logic, I’m assuming #9428 was shaped right before #9429, sometime in late 1968. You can see the numerous similarities between both boards. The outline, the triple stringer and the fins are almost identical. One interesting difference is the fact #9429 has a squash tail, whereas #9428 has a pintail.

I’m all but certain the boards were shaped sequentially. That said, from what I’ve gathered the serial numbers on Yater’s boards are sequential, but only in certain batches. In other words, it’s not the case that Yater started at #1 and continued to this day. I can’t say how these batches are organized, but I feel confident that #9428 and #9429 were shaped back to back, or at the very least within a short time period of one another.

Finally, it’s interesting to note the differences between #9428 / #9429 and the Yater Pocket Rocket, which came about in 1969, less than a year later. The Yater Pocket Rocket is probably Renny’s most famous Transition Era model, and yet it is incredibly different from the boards featured in this post.

The Pocket Rocket was designed with powerful Hawaiian surf in mind. You can see the outline is much more pulled in than the two single fins featured earlier in this post. You can’t see from the photos above, but the Pocket Rocket has a much more dramatic rocker than either of the other Yater boards I wrote up here. Surfboard design progressed at a dizzying pace during the Transition Era, and the differences between #9428 / #9429 and the Pocket Rocket are a great illustration of that process.

Thanks for reading, and if you own any cool examples of Transition Era Yater shapes, I would love to hear from you.