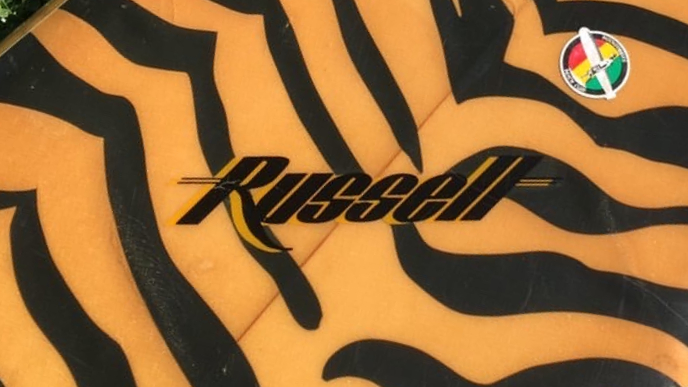 Greetings, Shredderz! Today we’ve got a quick hit for you courtesy of the Inland Empire Kook. From his perch in Rancho Cucamonga, this gentleman has been slinging some neat sticks that you have probably seen on Craigslist within the past few months. Today we have an absolutely killer vintage Russell Surfboards stick with an outrageous design courtesy of this heavy IE local.

I’m ashamed to admit that I never thought to combine neon, checkerboard graphics, and a tiger stripe print, but now that I have seen it, there’s no going back. I don’t know who the genius is who came up with this combo, but he (or she) deserves a Nobel Prize for this work.

And even if you don’t care for obnoxiously loud surfboard graphics, Russell Surfboards is an Orange County label with more history than most. Shawn Stussy got his start at Russell Surfboards before shaping boards under his own name, for example.

The board has a beautiful outline and it comes with what looks to be an original fin. I imagine that when the board was initially shaped the colors on the fin complemented the checkerboard pattern on the deck.

I’m not sure who shaped the board. As you can see there’s a tiny “PS” signature along the stringer on the deck. If you have any educated guesses, I’d love to hear them.

Thanks again to The Inland Empire Kook for sharing the photos of this ridiculous and over the top board, which I simply cannot get enough of. Give him a follow on Instagram — he frequently sells vintage boards and posts about them there.