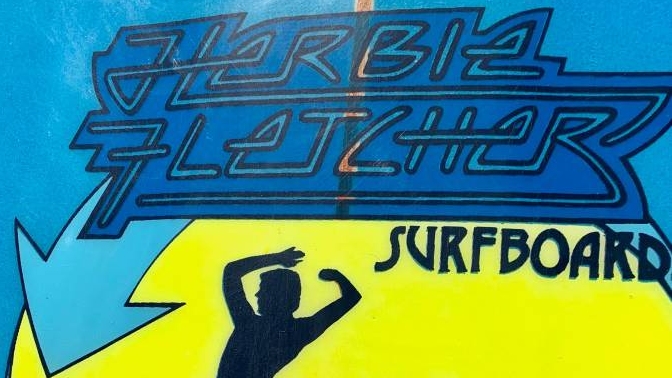 Greetings, Shredderz! Regular readers of the blog have likely seen previous posts on the Fletcher family. I recently wrote up a cool Astrodeck ad from 1989, and Christian Fletcher’s signature model remains one of the most coveted boards of the Nineties. Check out their new Fletcher DNA YouTube Channel for some great footage, too.

The Fletchers have done more than their fair share of interesting projects over the years. That said, I’ll always have a special interest in Herbie Fletcher’s surfboards, and his square nose longboards in particular. I’ve written up two previous Herbie square nose longboards before. Most recently I featured this racy little pintail Killer Model, which has a truly unusual outline. Before that I wrote up another square nose Herbie board, which you can find here.

The board pictured above is yet another square nose Herbie Fletcher noserider, and it’s currently listed for sale on Craigslist in Long Beach. You can find a link to the sale listing here. The board is not mine and all photos in this post are via the Craigslist link, and I do not know the board’s seller.

According to the seller the board measures in at 8’10” x 23.5″. As you can see in the photo above, the board’s nose has been squared off for better nose riding. Many, many thanks to the seller, who has provided some really spectacular photos in the listing. If you look closely above you can see what appears to be a small ridge right where the logo is. I’m guessing the ridge is supposed to help out for noseriding, too.

I love seeing unique vintage boards, and this one is certainly no exception. It also doesn’t hurt that Herbie has turned in some pretty memorable surfing performances on these sticks.

I have a hard time figuring out when this board might have been shaped. My best guess is sometime during the Eighties. Joel Tudor recently shared some background on Instagram about how many of the longboards shaped during the late Seventies were under nine feet. Apparently the most popular longboard blank during this time was 9’0″, hence the slightly shorter boards. The Herbie Fletcher board you see above is 8’10”, which matches the time period Tudor references, but it could also be a coincidence. Shawn Stussy also comments in the thread, and he specifically refers to Herbie riding square nose down rail longboards during the Eighties at Trestles.

I still don’t have a reliable way of telling whether or not Fletcher shaped a given board. There is no signature on this one, just a number on the stringer. For example, here’s an old Astrodeck / Herbie Fletcher Surfboards ad that shows Mike Perry was one of the production shapers.

You can find a link to the Craigslist post here.