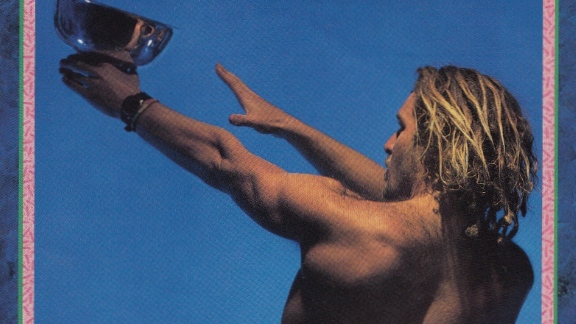 Greetings, Shredderz! I’ve written many — maybe too many — posts expressing my admiration for Gotcha’s boundary pushing ad campaigns during the Eighties and Nineties. The brand, led by the talented and troubled Michael Tomson, had an undeniable swagger and a distinct visual identity during its prime, not to mention a logo designed by Shawn Stussy. (Obligatory plug for the rad board Stussy shaped for Tomson once upon a time.) Gotcha sponsored some of the world’s best surfers during its heyday, often led by Martin Potter, who was of course a staple of the brand’s marketing.

The Gotcha ad pictured above originally appeared in the July 1990 issue of Surfing Magazine (Vol 26, No 7), fresh off a Pottz world title. The photo you see above is part of a much larger spread featuring Gotcha’s team at the time, including Pottz, Michael Ho, Derek Ho, Nick Wood, Dino Andino, Brock Little, Cheyne Horan, Mike Stewart and Gerry Lopez. I love the photo in Pottz, outfitted in a truly obnoxious pair of trunks, regarding his world title trophy. The other cool touch is the photo of Michael Ho at the bottom of the page. The caption reads: “See this picture? He’s done it for 25 years. He’ll do it for another 25 — Michael Ho.” So far the ad has been right on the money about Ho’s surfing career, as he can still be found charging Pipeline into his sixties.

I still hold out hope for a revival of the Gotcha brand, as I think it was one of the few surf labels with genuine creativity behind its clothes and its advertising. Until then, I’ll keep myself busy by writing up posts like this one.

Thanks for reading and we hope to see you in a week for more Sagas of Shred!