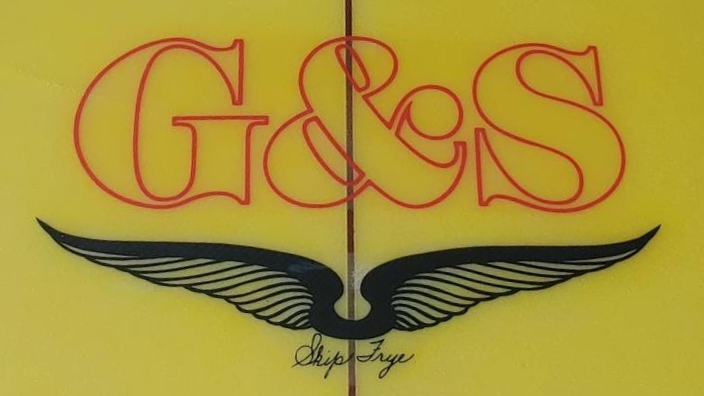 Greetings, Shredderz! For those of you Stateside, I hope you’re all having a wonderful (and safe) Memorial Day. As always, the Weekend Grab Bag features surfboards that are all listed for sale as of the time of publishing. Without any further ado here’s a handful of sticks that are up for grabs, including a cool G&S Skip Frye egg, a Yater, and some other odds and ends. Keep scrolling for more!

The G&S Skip Frye single fin you see above is described on Craigslist as a Gordon & Smith Modern Machine Model. I’m wondering why this board wouldn’t be considered a Skip Frye egg, but maybe I’m overthinking things. The G&S website has a description of the Modern Machine shape here. A quick Google search doesn’t turn up any info connecting Frye to the Modern Machine model. The board was shaped in 1974 and it has since been “done up” at Joe Roper’s and has not been surfed since, according to the listing. The seller is asking $2,000.

Apologies for the low quality photo, but I figured this was better than nothing. Count me very intrigued by the Yater Surfboards sled pictured above. First of all, it looks to be quite clean. The listing only has two photos, so it’s hard to tell exactly what’s going on, but it looks to me like the board above is a Pocket Rocket. The seller claims it’s 6’10” and shaped in 1969, and both of these attributes would suggest the Pocket Rocket conclusion, too. (Here’s another cool Yater Transition Era board I wrote up earlier.) The asking price is $1,000, but if this is indeed an original Yater Pocket Rocket in good condition, then I think that’s reasonable. Whoever ends up snagging this one, definitely let me know!

I don’t know a ton about Greg Jensen, and in fact had never heard of him before I saw the board you see pictured above. That said, anything with Dick Brewer’s name attached to it is automatically interesting to me. I love the clean lines and the colors of this board. The listing doesn’t specify if it’s all original but I tend to think it is. It’s not cheap at $1,500 — also worth noting the price is already down from the initial $1,800 asking price.

It’s a shame this board isn’t in as good condition as it appears. Shout out to the seller for being very upfront about the warts on this thing, and pricing it appropriately ($80!). This would make a pretty handsome wall hanger. Cool bit of surfboard trivia: the resin pin lines were done by Dave Hollander, who was later Phil Becker’s business partner, and who was responsible for a lot of beautiful resin work on some Rick Surfboards. Overall this is just a beautiful board.