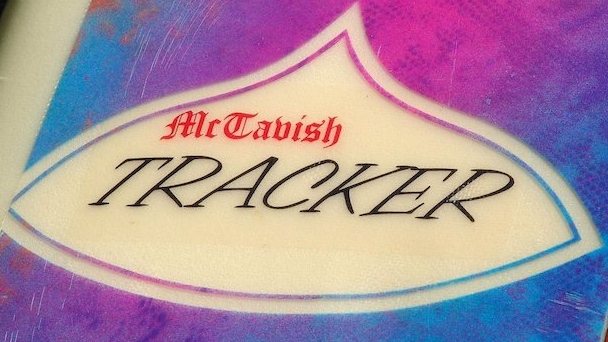 Greetings, Shredderz! Today I’m delighted to bring you an absolute classic featuring a classic shape from Morey-Pope Surfboards. Morey-Pope, the namesake of its founders Tom Morey and Karl Pope, is to me one of the most fascinating labels in surfboard history. The list of Tom Morey’s inventions is too long and interesting to cover as an aside in a single blog post. But I digress. The purpose of this post is to showcase an absolutely stunning Morey-Pope McTavish Tracker. The photos you see here come via noted Bing collector Tom Moss, who originally shared the photos on Facebook. Thank you Tom for your permission to use these photos.

The Morey-Pope McTavish Tracker was produced during the late Sixties during the Transition Era. As the name suggests, the model was a collaboration with Australian shaper Bob McTavish. McTavish is credited with having invented the vee bottom, and he is widely regarded as a critical figure in ushering in the shortboard revolution.

Liquid Salt has an excellent writeup on McTavish and it focuses on a board it dubs the “McTavish Rincon Tracker.” According to the article and McTavish’s recollection, the Rincon Tracker was the first shortboard shaped in California, at the Morey-Pope factory in Ventura. It’s amazing how many influential figures were involved in the creation of the first tracker. McTavish borrowed the Tracker’s nose from Dick Brewer, with a young Gerry Lopez popping in and out, and then stayed with George Greenough during his trip to California, during which he conceived the shape. According to the book “365 Surfboards”, the Morey-Pope McTavish Tracker was the first-ever production shortboard, starting from its introduction in January 1968.

As you can see in the various photos above, Moss’ Morey-Pope McTavish Tracker is incredibly clean. True to Tom Morey form the board has a few other Morey inventions, whether it’s the Slipcheck traction applied to the deck, or the W.A.V.E. Set fin box. Many of the McTavish Trackers boast colorful Slipcheck patterns, and Moss’ board is definitely one of the most striking I have seen to date.

Moss’ McTavish Tracker is 8’3″ and he estimates the board was shaped in 1968 or 1969. Not only is it a beautiful board, it’s also a well-preserved piece of surfing history, and I’m glad it has found an appreciative owner.