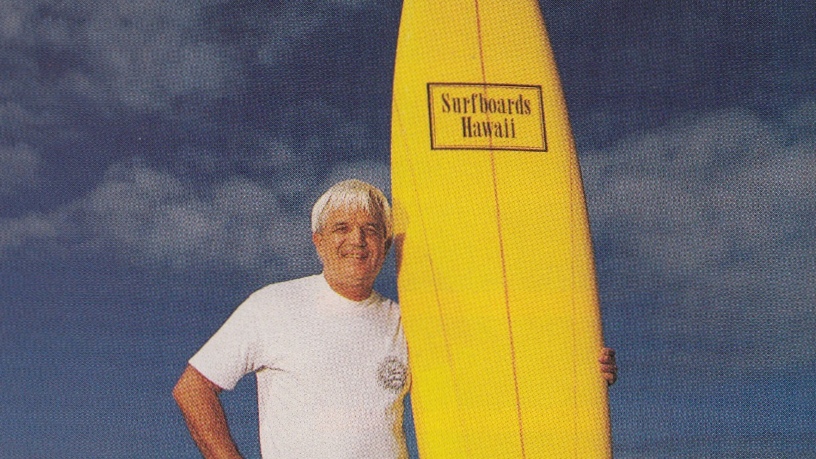 The ad you see here originally ran in the August 1990 issue of Surfer Magazine (Vol 31, No 8). Earlier today I was on Instagram and I happened to randomly come across a picture of Occy surfing a Dick Brewer board. You can see the post below.

I had never heard of Occy ever surfing on Brewer’s boards, much less as a team rider. In some ways I still do a double take whenever I see the ad. Generally speaking I love anything neon, but it just seems a little odd to see a someone like Dick Brewer embrace the over the top aesthetic that defined the Eighties.

What’s doubly strange about the ad is the magazine happens to have an incredible in-depth profile on Brewer himself. (I also caught wind of this on Instagram, via Surfy Surfy.) Even better, the profile is written by none other than Derek Hynd. According to Hynd’s write up he had never met Brewer in person before they synced up for the profile, which I also find a bit surprising.

The profile has a ton of great information that I had never read about Brewer’s career, including some background on an apparent decades-long rivalry with Mike Diffenderfer, and some great stories on Brewer’s contributions to the Shortboard Revolution of the late Sixties. If you can track down this issue of Surfer Magazine it’s well worth a read, if for no other reason than the Brewer profile. I’m also tempted to just transcribe the article myself, as sadly Surfer doesn’t seem to have any interest in putting their archives online, and it’s one of the rare in-depth pieces on one of the most influential surfboard shapers of all time.

Finally, the Dick Brewer profile also contains a great shot of the man himself posing with a gun that I actually wrote up a few years back. I believe the yellow gun in the photo below was originally shaped for Darrick Doerner, but it ended up in Rabbit Bartholomew’s hands.

Thanks for reading and we’ll be back in another seven days with another vintage surf ad!