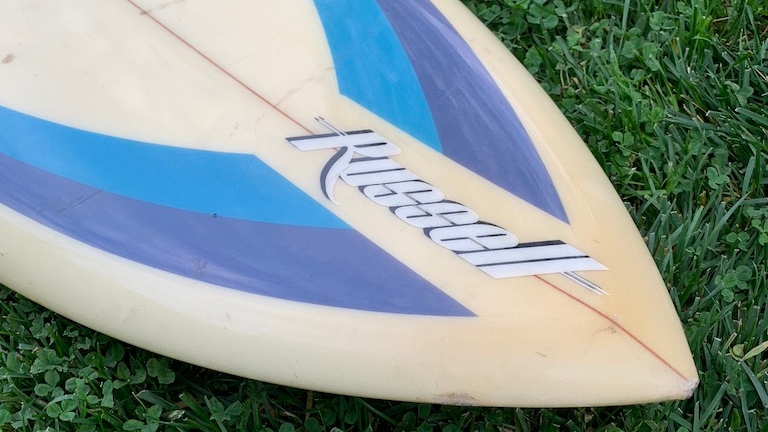 Greetings, Shredderz! Today we’re coming at you with a quick hit straight from my modest collection of sticks. Pictured here is a Shawn Stussy Russell Surfboards single fin I own that was likely shaped in the late Seventies. You can click the photos below for a close up.

The Shawn Stussy Russell Surfboards single fin you see above is about 6’2″, maybe a little longer. I don’t have exact measurements so you’ll have to just trust me when I say it’s thick and has some meaty down rails. I believe the board was likely shaped in 1979, maybe even early 1980. I’ve pieced this together by combing over Stussy’s Instagram, where he provides some dates that are helpful in establishing a loose timeline of his shaping career.

First, as you can see in the post above, by May 1980 Stussy had left Russell Surfboards and was shaping boards under his own name. That means that any boards Stussy shaped under the Russell Surfboards label were made in the Seventies (or in the first four months of 1980 at the latest.)

Second, the post above provides some context around what Stussy’s boards looked like in the winter of 1977-1978. Granted, comparing the quiver above to the single fin featured earlier isn’t exactly apples to apples. That said, the Russell Surfboards single fin I own looks more modern to me, and less like the classic Seventies single fin guns featured in the Instagram post directly above this paragraph. The subtle wings and the swallow tail also suggest to me that the board was shaped towards the end of Stussy’s tenure with Russell Surfboards.

Damion at Board Collector has a nice writeup of Stussy’s twin fins, which you can find here. The photos of the blue twin fin above were originally found on Board Collector. I tend to think the blue twin fin above and the board I own were likely shaped within a similar timeframe. The wing / swallow tail combo also appears to have been a common outline for many of Stussy’s early Eighties twin fins.

The Shawn Stussy Russell Surfboards single fin I own is clearly signed on the stringer. Shawn himself has not officially verified this board as one of his shapes, but I have a hard time coming up with any alternative theories. I don’t know what to make of the numbering, either. I’ve seen plenty of Stussy / Russell boards without any numbers (or even signatures, for that matter), so your guess is as good as mine.

The board looks a bit cleaner in the pics here than is actually the case. There are a bunch of little dings throughout, and the tail, as is often the case with vintage swallowtails, needs some surgery. Overall, though, the board is pretty well preserved considering it’s over forty, and there is no delam, twist, etc.

Shawn Stussy is among that rare class of surfboard builders whose career has branched out far beyond foam and fiberglass. It’s always exciting to see the new things he works on, but I also enjoy returning to Stussy’s roots as a shaper in Orange County during the Seventies. To me, Stussy’s Russell boards are the genesis of one of the most fascinating careers of of any designer, as he is far more than just a shaper.

Oh, and if you’re curious…no, the board is not for sale!