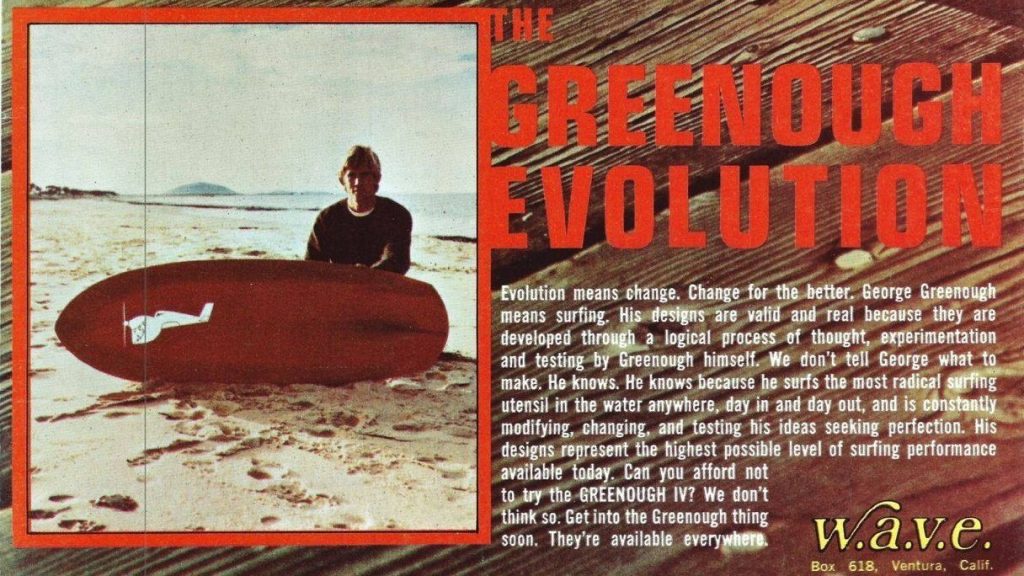 Greetings, Shredderz! Today we’ve got a real gem of a vintage surf ad for you. Previous Sagas of Shred posts have featured questionable art direction, pro surfers in embarrassing outfits, and incredible hairdos, but this time around we’ve got something for the purists. Featured here is an old W.A.V.E. Set fin ad featuring none other than George Greenough. Greenough is nothing short of legendary, thanks to his numerous contributions to modern surfboard design. Greenough’s resume is ridiculous before you even consider things like his early work with capturing point of view footage inside the tube. (See here for an 1980 O’Neill ad featuring Greenough and some experimental camera equipment.)

The W.A.V.E. Set ad you see above was likely from the late Sixties or the early Seventies, but I can’t say for sure. I originally saw the advertisement posted to the Surfboard Fin Collectors Facebook group.

The W.A.V.E. Set fin box was one of Tom Morey’s many creations. The Morey / Greenough duo might be the single most prolific pairing of inventors in surf history, now that I think about it. I’d love to learn more about how these two famously offbeat, brilliant personalities interacted with one another, but I don’t know of any reliable accounts of their relationship.

Greenough revolutionized fin designs with the introduction of the high-aspect fin. Decades later, Greenough’s fin templates are still relevant. It’s interesting to compare the fins in the ad featured above alongside the current Greenough fin templates offered by True Ames.

First, I don’t know if the GI or the GIII, as they’re referred to in the ad, are still sold in some form today. True Ames currently offers two variants of Greenough’s Stage Four fin (called the “GIV” in the ad above): the 4-C and the 4-A. True Ames’ website claims the 4-C was the predecessor to the 4A. The GIV in the ad above looks more like the 4-C than the 4-A, but I’m literally basing that off of eyeballing photos of the two templates.

More than anything else it’s cool to see Greenough pop up in surf industry collateral, given his reclusive nature.

Thanks for reading and we hope to see you next Thursday for more Sagas of Shred!