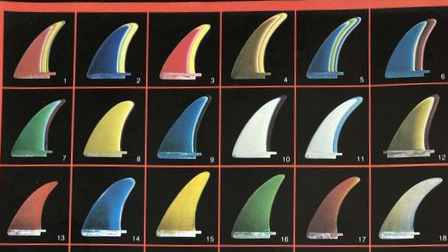 Greetings, Shredderz! We are back with another Price Checks installment. This time around we’re taking another look at the market for vintage surfboard fins. I recently wrote up a selection of vintage fins that ended up fetching some pretty eye-popping prices on eBay. A few choice fins traded hands on eBay this past weekend, so I figured it was worth writing down some prices and giving people an idea of what the market is doing.

Not going to lie: I was a little taken aback when I saw this fin sold for just shy of $300, when you include shipping. It’s a gorgeous fin, no doubt, but I think these are some of the highest prices I have seen. Take that with a considerable grain of salt: I don’t have extensive knowledge of the vintage surfboard fins market, and the point of these posts is more to document what I’m seeing than impart my point of view. I also can’t explain what’s driving the pricing. I’m sure template, color, condition and size all play a role, and this one seems to check a lot of the boxes.

Both the blue fin and the one above were sold by the same seller, and the sale prices ended within less than a dollar of one another. This one seems pretty straightforward, too: it’s a gorgeous fin with a high price tag.

The more I research vintage surfboard fins, the more I realize that I’m not actually sure how to identify a Rainbow fin, absent any branding. Luckily the logo on the fin above answers any questions on that topic. The two fins at the top of this blog post, for example, are both listed as Rainbow fins (although the seller describes them as “Rainbow style” in both descriptions). To be clear, this is not a criticism of the seller — I think it’s common for people to describe this entire style of vintage fins as Rainbow fins, and I have certainly done that myself.

As for whether “actual” vintage Rainbow Fins carry more of a premium than their counterparts, I can’t say. The red Rainbow Fin above was considerably cheaper than the ones at the top of the page, but I think that can likely be explained by many factors. Also, I suspect that the red Rainbow fin above is likely more recent than the other two.

This one is another vintage Rainbow fin, and it contains clear branding on one side of the fin. The branding obviously isn’t shown in the photo above, but if you click through to the eBay listing you can see some more photos. I suspect this fin is older than the red Rainbow fin that appeared earlier in the post. It’s in slightly worse condition but you can see the beautiful colors, which I imagine help explain the price tag.

Last but not least, we have another vintage 8″ fin. According to the seller this was taken from a Seventies Robert August single fin. I have a hard time explaining why this one would be 1/4 the price of the two fins at the top of the page. I’m kind of wishing I had pulled the trigger on this one, but I’m sure there will be more chances.

As a bonus, Instagram user @reddotgoods has been selling a bunch of beautiful vintage fins as of late. I’ve corresponded with Red Dot Goods a few times, and have posted some of their items, but there’s no financial relationship between the two of us. Red Dot Goods frequently post and sell great vintage fins via Instagram, so give ’em a follow if you’re in the market for one!