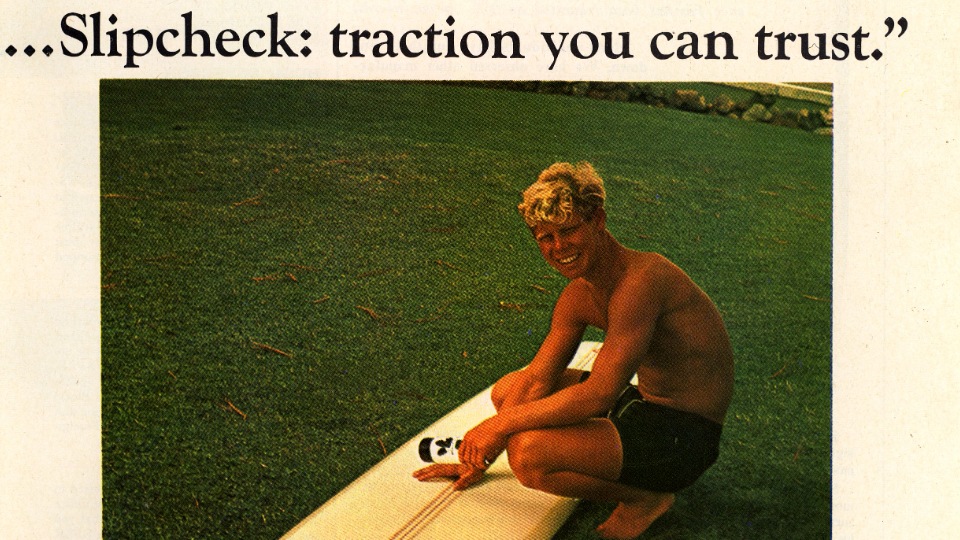 Greetings, Shredderz! Today we’ve got a Sixties Slipcheck ad for you featuring none other than East Coast legend Gary Propper. Propper was an early pro surfer, and later on in life he dabbled in the entertainment business, first as a manger to comedian Gallagher, and then as one of the driving forces behind the Teenage Mutant Ninja Turtles movie (yes, really.)

The Slipcheck ad above must have run sometime in the Sixties, and it originally appeared in Surfer Magazine, though I don’t know which issue. I believe Propper is posing alongside one of his signature Hobie GP Models. Slipcheck was an early traction product invented by the prolific Tom Morey, whose overactive imagination has been a real boon to the surf industry.

Longtime readers of the blog may know that for the Sagas of Shred series, I usually prefer to scan a vintage surf ad from my collection of magazines and post it here. I was a little pressed for time this week, and I found the ad above on a Pinterest board, which has some cool stuff saved (including more than a few photos from this blog!)

Sadly, Propper passed away last year at his home in Florida. You can read his Surfline obituary here.

Thanks for reading and we’ll be back next Thursday with more Sagas of Shred.