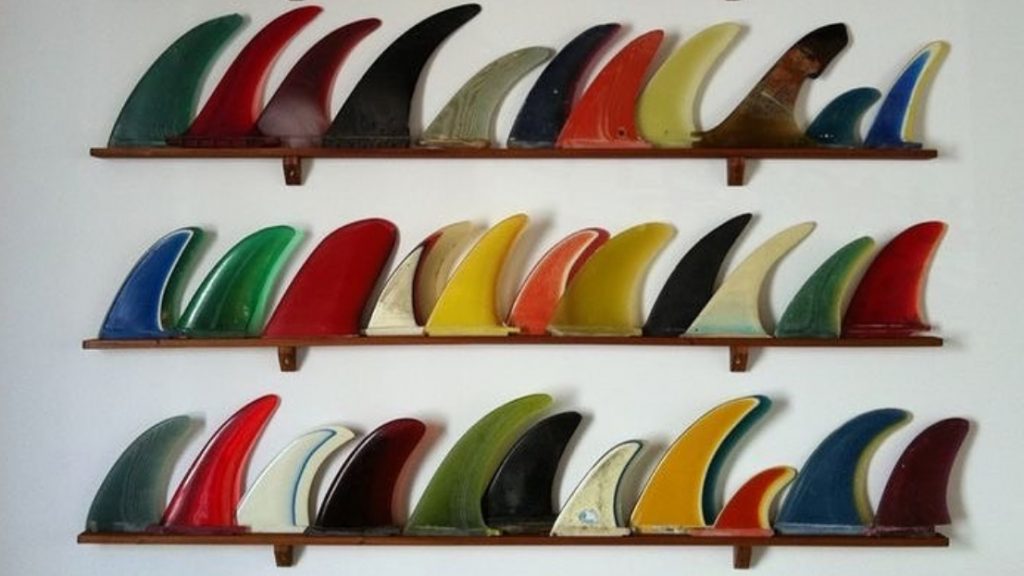 Greetings, Shredderz! I love vintage surfboard fins, especially those with multi colored layups, and by the looks of things, I’m definitely not the only person who feels this way. Last month I wrote a post about the vintage surfboard fin market. Since then, prices seem to have only inched further upwards. See below for some examples of recent fins that have sold on eBay, along with their prices — and, of course, some pics of gorgeous vintage surfboard fins.

Well, everyone, we’ve done it: we’ve gone and blown past the $300 price point for vintage fins. Now, don’t get me wrong, this is as clean as it gets. I’m still digesting the price, but hey, if you’re going to go big, you might as well get something special in the process. I don’t know exactly when this fin was made, but I’d guess sometime in the Seventies.

Our next fin doesn’t have quite the same jaw-dropping price tag as the first one, but I really dig it. Apparently this is a Donald Takayama fin template. I can’t date this fin for you, either, but if you know more, drop me a line.

Here’s another fin that also cleared the $200 mark recently. Unlike the first two fins featured in the post, this one does not bear any Rainbow Fin branding. I still struggle with how to identify a Rainbow Fin unless there are clear logos present. That said, I suspect that buyers care more about the condition and color of a fin, and it’s unclear to me if there’s a premium for vintage fins specifically made by Rainbow Fin Co.

I’m cheating a little on this one, because the auction is still ongoing, but I couldn’t resist. It’s interesting to compare this Rainbow logo with the top two fins. The first two vintage surfboard fins in this post have logos that say “Rainbow Fin Company”, whereas the one above simply says “Rainbow” on the side. According to the seller the Rainbow logo is not a sticker and is beneath a layer of fiberglass. As of the time of this post the bidding is up to $124.50; I wouldn’t be surprised to see this one blow past the $200 mark before the dust settles.