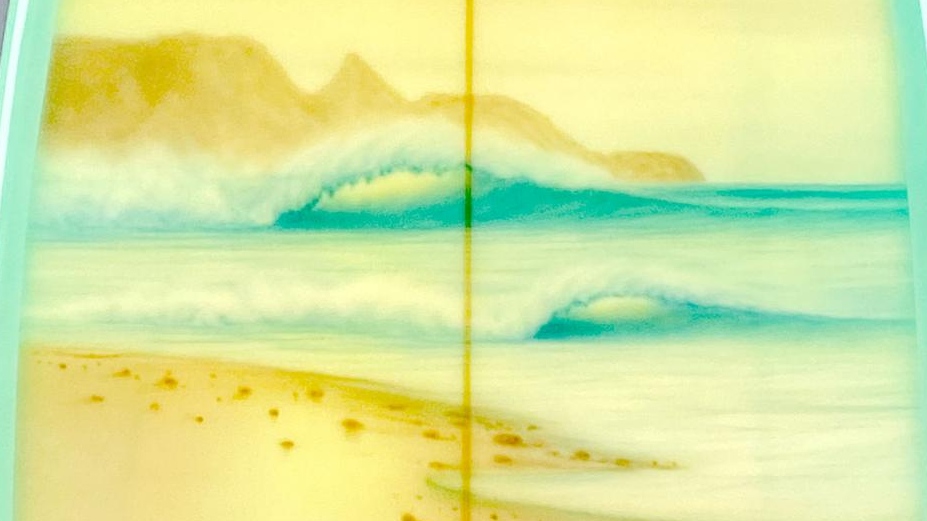 Greetings, Shredderz! Scott Bass’ Boardroom Show and its accompanying California Gold Vintage Surf Auction were originally scheduled for May 2020 before Covid-19 ruined everybody’s plans for the year. While the in-person aspects of the show have been delayed, if not outright canceled, the auction continues online. Bidding commenced yesterday on a fresh lot of collectible vintage surfboards. You can see all of the auction lots here; all photos in this blog post are via the official California Gold site.

California Gold is known for offering up a wide variety of interesting boards for sale, and every year I have made it a point to write up some coverage of the auction lots. See here for my blog posts on all the previous California Gold auctions.

In the first part of the post I cover a handful of my favorite boards from the show. I also share some thoughts around the show itself, and some constructive criticism that I hope will be taken into account for future versions of the auction. Keep reading for more.

There are a lot of great boards to choose from, and if I’m simply writing about the boards I’d like to own, this post could easily feature ten of them. I don’t have much to add about obvious classics like the pair of Gerry Lopez Lightning Bolt boards (one shaped in 1999, and the other in 2020, I believe), which both already have bids in the $5K range. Here are my personal favorites:

This board actually caught my eye a few months back, when Joel Tudor posted about it on Instagram while the board was being fixed up at Joe Roper’s Ding Repair. I have been open about my love for Stussy’s shapes, and who can argue with one that has been co-signed by both Joe Roper and Joel Tudor? Curiously, there are no dimensions given. While I associate Eighties Stussy boards with loud patterns — take this incredible twin fin, for example — I dig the restrained aesthetic on this stick. There are a few signature Stussy graphics sprinkled throughout, but to me the focus remains squarely on the pure, clean lines of the shape. I think Stussy produced way more single fins under the Russell label than his own brand, which makes this one something of a rarity.

Finally, a strange bit of a Stussy trivia within the auction. There’s a Steve Lis quad fin fish with a distinct Stussy “Equipment for the Modern Age” laminate beneath the glass. Curious to hear the backstory on how this came about.

Are there any shaper / surfer pairings more classic than Merrick and Curren? Al shaped this board for Curren towards the end of his competitive career. You can see that Curren signed the board “91” on the bottom. There is an unmistakable Al signature on the stringer, as you can see in the photo at the top right. For another hand-shaped Merrick board that Curren rode in a similar time period, check out this earlier post.

I’m always down for an over-the-top airbrush, and this 5’4″ Rich Pavel-shaped fish doesn’t disappoint. The artist who did the airbrush is named ZOD, AKA Paul Bramer. According to the description the board was shaped in 1981 and it is all original. As you can see it is in stunning shape. I have featured a few Lis / Pavel boards before — check out this twin fin with a killer airbrush — and the tight knit scene of Sunset Cliffs kneeboarders that birthed the fish design remains an area of fascination for me.

A few years ago, when I was between jobs, I sent Scott Bass a cold email and asked him if he was hiring. He was gracious enough to not only respond to my email, but also complimented me on my work experience. Other than listening to the occasional episode of his podcast, that is the extent of my interactions with Scott. However brief, the exchange left me with a positive impression.

I feel compelled to mention this context before I go into some criticisms about the auction. I think the California Gold auction is a noteworthy event for anyone who collects surfboards, or just likes them. I raise these points because I like the auction, it is indisputably an important part of the surfboard collecting landscape, and I would love nothing more than to see it improved. And from my limited experience, I have found Bass to be, at a minimum, a very nice guy.

That said, as great as the auction is, I think there are some issues that I would like to see addressed for future versions of the show.

First and foremost, I think there needs to be more clarity regarding the provenance of the boards, and the efforts that were taken to verify the history of each shape.

The listing for a Takayama Larry Bertlemann twin fin claims the board was shaped in 1979. I think this is incorrect and the board was likely shaped in the early 2000s. I have seen examples of Takayama / Bertlemann twin fin reissues that were shaped in the early 2000s, with the exact same logo. The signature on the Takayama in the auction is very consistent with the signatures on his boards from the late 90s and early 2000s. See below for a comparison:

I have also seen many examples of 90s Takayama boards where he simply signed his initials “D.T.” on the stringer. See this Surfing’s New Image Takayama sting here. Even though I have previously made a big deal over the Takayama boards that are signed in pencil — versus the boards made after his passing, which have Donald’s signature in a bold black graphic — it is known that Donald used production shapers before his passing. So if the twin fin was actually made in the early 2000s, it also raises questions about whether Donald shaped the board, which should affect the price as well. This is still a phenomenal board, to be clear. But these details matter.

Take a look at the Surfboards Hawaii Dick Brewer Makaha Gun. The estimated price for the board is $8K to $12K, which is among the highest price ranges in the auction. Has Brewer verified that he shaped it, or have the folks behind the auction attempted to reach out to him? The board looks to be in incredible condition. I have no reason to suspect foul play, but I’d like to know what kind of research was done to confirm that the board is indeed all original, and not a glass-off restoration or a recent reissue.

There’s also a board described as a Lance Carson personal gun. Whenever a board is listed as a personal rider, I’d prefer to see first-hand verification, or, if that’s not possible, context on whether or not the board’s owner and/or shaper were contacted. In this case, we only have an account from a previous owner of the board, who claims it belonged to Lance. Frankly, this isn’t enough evidence to declare this board a Carson personal rider, especially when Carson is still alive.

I also find myself puzzled by the price ranges listed for certain boards. Check out this cool triple stringer Channin gun. The estimated price range is $2,500 – $3,500. I have a hard time reconciling the price range with the fact there has been another Channin gun listed on eBay at $975 for the past few weeks, if not longer. Now, let’s be clear that the auction gun is a nicer board, but even when you adjust for the condition, etc., I have trouble making the math work.

The auction has two Skip Frye boards for sale. It would be one thing if these were special Skip boards — for example, last year’s show had a cool 50th Anniversary Fish Simmons, with art by Skip’s wife, Donna — but that doesn’t seem to be the case. I can’t understand why anyone would pay $5 – $7K for a new Fish Simmons (admittedly a gorgeous board, and this also assumes the price range is correct). In my opinion the board is overpriced at that range, even by the high standards of Skip’s coveted sticks.

Finally, the elephant in the room is how Covid-19 will affect prices. I am not an economist, and I don’t even play one on the internet. But you don’t need a PhD to realize shit is crazy right now, and if you’re pulling back spending, your collectible surfboard budget is probably the first to go. I suppose we’ll all find out when the lots close in a little less than two weeks. I personally would not be surprised to see prices come in at the low end across the board, given all the uncertainty in the world right now.

It’s worth repeating that every year I look forward to seeing what boards get sold at the California Gold auction. By and large the auction does a great job of gathering a range of interesting and notable vintage boards, and that’s a wonderful thing. Going forward I would love nothing more than to see the auction continue to curate phenomenal surfboards, but with some additional transparency around their provenance.