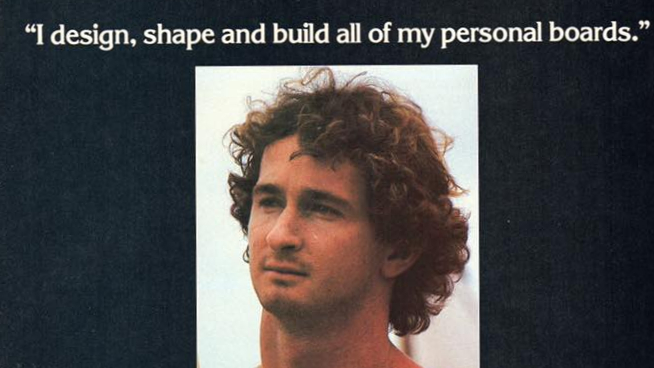 Greetings, Shredderz! Alas, I do not have a fresh magazine scan for you today, but what I do have is a vintage ad featuring Mark Richards.

I believe the ad originally ran in 1981. The ad is actually for Richards’ stateside collaboration with Gordon & Smith, who produced licensed MR designs out of their San Diego headquarters. I find the headline slightly misleading, but that’s a minor complaint. There’s tons of good stuff in there, such as some insight into the G&S shapers at the time: Robin Prodanovich, Hank Warner, Terry Goldsmith and Electric Duck, AKA Mike Richardson. There’s also a callout for Star System fins, a short-lived proprietary G&S fin box at the time. The ad itself was originally posted on Facebook — you can find the original link here.

Before Kelly Slater came along and obliterated the pro surfing record books, MR was the competitive GOAT, having won four straight world titles during his prime. MR is still the last person who can say he won a world title surfing his own boards. I think that’s unlikely to change, and while that probably speaks to the evolution of pro surfing more than anything else, there’s no denying MR’s unusual dual role as a world class shaper and competitive surfer.

If you don’t follow Richards on Instagram, you’re playing yourself. You can never really tell without meeting someone, but I get the sense Richards, for all his accolades, is a humble and thoughtful guy. I’ve said it many times, but he also has a tendency for sharing some great context on boards he has shaped and/or ridden in the past, and it’s always awesome to get his detailed account of various boards.

As always, thanks for reading and we’ll be back next Thursday with more Sagas of Shred!