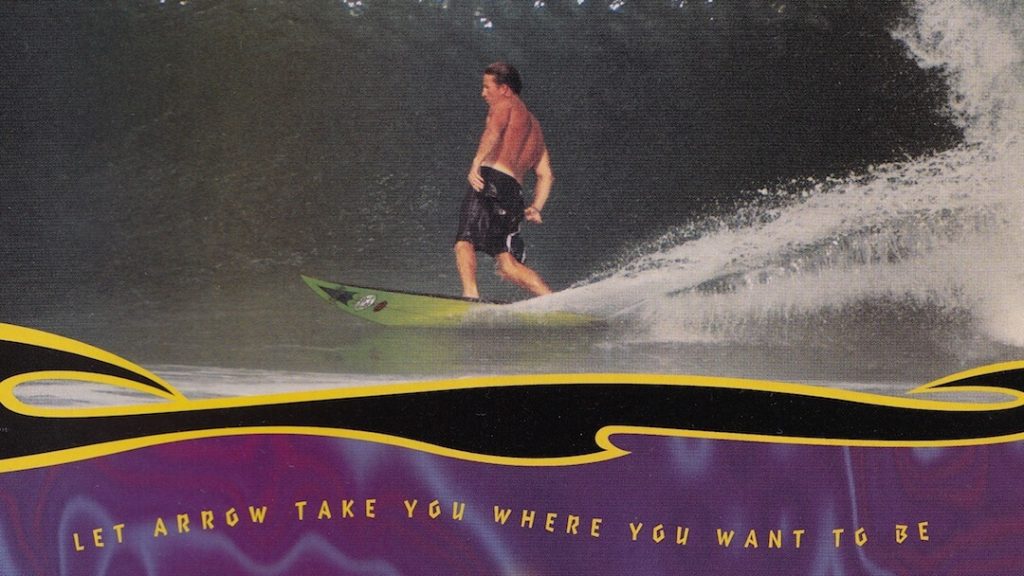 Greetings, Shredderz! I remain fascinated with Santa Cruz and its surf scene, which has made its way to the blog many times. I recently featured a killer O’Neill Morning Star model, Mike Croteau remains a blog favorite, and I even picked up a killer Steve Coletta / Natural Curves board last year, just to name a few.

Today we have a Pearson Arrow Surfboards ad from the May 1996 issue of Surfer Magazine (Vol 37, No 5). Bob Pearson provided boards for many top Santa Cruz pros during the Nineties, when surfers like Darryl “Flea” Virostko, Shawn “Barney” Barron (RIP) and Jason “Ratboy” Collins became magazine fixtures, thanks to progressive aerial surfing, the emergence of Mavericks as a premier big wave spot, and a whole lot of insane nicknames. The ad features Ken “Skindog” Collins charging a pit somewhere far warmer than Northern California. I love the fact that Collins’ government name is nowhere to be found on the ad itself.

Skindog actually featured this ad on an earlier Instagram post, which is worth reading. He gives a great account of traveling to Puerto Escondido in the early Nineties.

Skindog was not only a longtime Pearson Arrow team rider, he airbrushed boards for the label before his pro surfing career took off. Collins might actually deserve some of the blame for popularizing tribal tattoos during the Nineties, but I think that’s a whole ‘nother story.

As always, thanks for reading, and we’ll be back with more Sagas of Shred next Thursday.