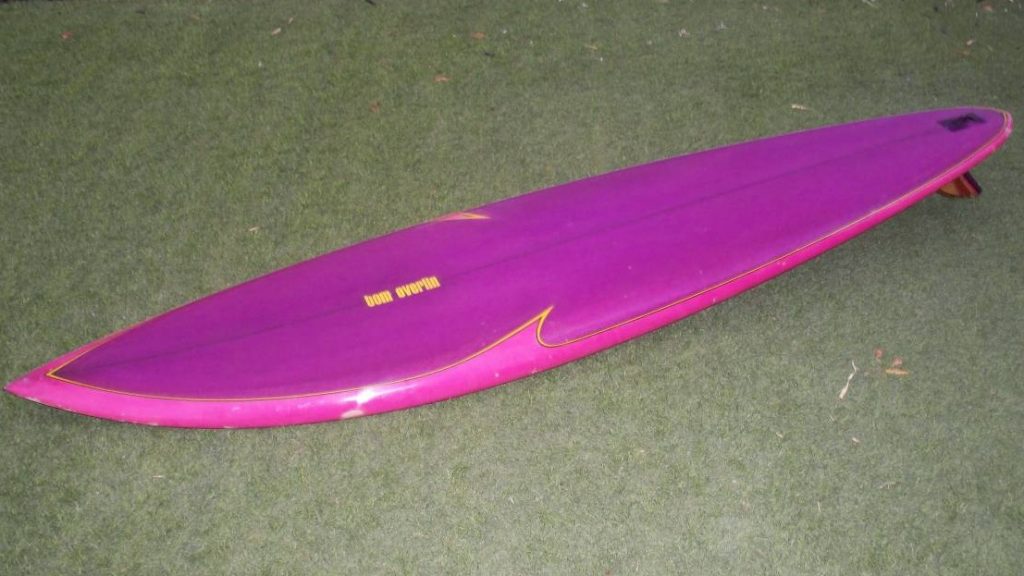 Greetings, Shredderz! It’s not exactly the weekend any more, but let’s not semantics get in the way of another Weekend Grab Bag installment. As always, all the boards listed below are on sale as of the time the post is published. Today we have an eye-popping Tom Overlin single fin, a Nineties Skip Frye Eagle and a funky Transition Era Russell Surfboards stick. Keep scrolling for more.

Any time a Skip Frye surfaces on Craigslist it’s worth covering. This Skip Frye Eagle “Big Board” — from what I understand, Skip eschews the more popular glider term — was shaped in the Nineties. The ad says the board was “refinished several years ago”, but I’m not sure what this means, exactly. It has a single glass on marine plywood fin, and some cool older Moonlight Glassing logos. Seller is asking $2,600.

I’ve posted about a handful of Tom Overlin’s boards on Instagram and here on the blog. Tom’s brother, Jim Overlin, also shaped boards. (See here for a beautiful single fin Tom Overlin shaped for Pat O’Neill, who I believe is Jack O’Neill’s son.) I have a longstanding curiosity about the shaping scene in Santa Cruz, which is where Overlin spent part of his career. This single fin, which measure 6’11.5″ x 19.5″, has a beautiful outline and it looks phenomenal. You can never go wrong with a matching glass on wooden fin, either.

This board is an interesting shape, but really, I’m just here for the incredible oversized Brotherhood logo. The seller claims the board is from 1969, which I believe, especially given that it has a W.A.V.E. Set fin. It’s a funky transitional shape. I’m wondering if the Brotherhood logo wasn’t painted after the fact — I had never heard of that term being used in the Sixties, even though Russell was producing boards back then. Your guess is as good as mine!