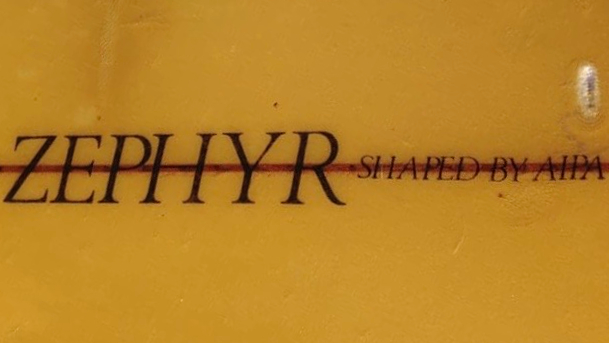 No, the title of this post is not a misprint. When I first came across this board I almost fell out of my chair. Ben Aipa shaped boards for Zephyr , the iconic Venice-based label that helped define the gritty Dogtown scene of the Seventies?! I still can’t quite believe that these two ever worked together, but whatever the case might be, I’m more than happy to document it.

As you can see, the Ben Aipa-shaped Zephyr board is a somewhat standard looking Seventies single fin. It has a swallow tail, and it’s got a ton of foam, as you would expect. The board is by no means in perfect condition but the important parts seem to have survived. You can see that there’s still some cool, minimal pin lines on the deck as well (though based on the fading, I suspect they are drawn underneath the glass somehow.)

The tail looks pretty beefy, and while there’s a bit of discoloration, etc., sometimes these swallowtails have a tendency to get absolutely destroyed over the years, so it’s nice to see that most of it is still intact.

There’s a really cool abstract pattern on the bottom of the board, along with a matching, creamsicle colored fin. The artwork has faded over the years, but it’s still super cool.

This board was originally posted to the Vintage Surfboard Valuations Facebook Group. You can find the link to the original post here. There seems to be some disagreement as to whether or not the board was shaped by Aipa himself. Unfortunately, there may not be any good way to verify the board’s history, given that Ben Aipa has been in poor health recently. That said, I personally believe the board is an Aipa shape. Matt Johnson, a collector whose boards I have featured before, also weighs in on the Facebook thread, indicating that the Aipa family believes the board was shaped by Ben in LA, and that there are other examples of boards he shaped in California. I trust Matt’s account, and I also have no other way to explain how on earth this board came about. First, it is definitely a Seventies board, so at the very least the timelines add up. Second, there’s zero believable explanation for this board being a counterfeit. It’s just too weird. I suppose there’s a tiny chance someone took a vintage Seventies board and slapped some weird laminates on it, but that seems very unrealistic.

No two ways about it, this is a strange and unexpected board, but also a delightful one. Ben Aipa for Zephyr Surfboards! I still can’t quite digest it, but I’m thrilled to have stumbled across this weird and incredible piece of surfing history. Thanks to the board’s owner for allowing me to run the photos you see here.