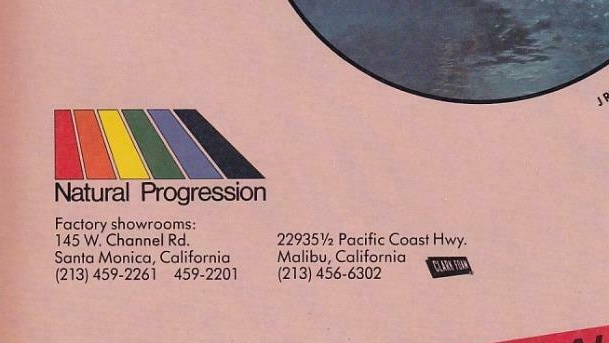 Greetings, Shredderz! I’ve had a long fascination with LA-based Natural Progression. Visually, NP struck me as the exact opposite of fellow Seventies Los Angeles label Zephyr. Zephyr Surfboards, despite some of the bright airbrushes on its boards, seemingly embodied the grittiness of Seventies Venice Beach, with an added undercurrent of hostility. My understanding is that the Zephyr crew weren’t so welcoming to non-locals, particularly when surfing the infamous Pacific Ocean Pier, which looked post-Apocalyptic, set against the backdrop of an abandoned seaside amusement park.

Natural Progression, on the other hand, always struck me as sunny and optimistic. I have no basis for this conclusion other than the cheerful colors of NP’s rainbow logo, which to me is one of the better bits of graphic design to emerge from the surf scene of the Seventies.

I was never quite sure whether Natural Progression called Malibu or Santa Monica home, but according to the ad above, they had showrooms in both places. The ad you see above originally ran in 1979, and it is currently being sold on eBay, where I found the photo. You can find the listing here. According to the Encyclopedia of Surfing, J Riddle was one of the co-founders of Natural Progression, and he was also a longtime Malibu fixture.

I still would love to know more about the full Natural Progression story, but in the meantime, I’m stoked to have found the ad you see above. For a cool Robbie Dick NP single fin, check out this earlier post I wrote.

Thanks for reading and we’ll be back next Thursday with more vintage surf ads for Sagas of Shred!