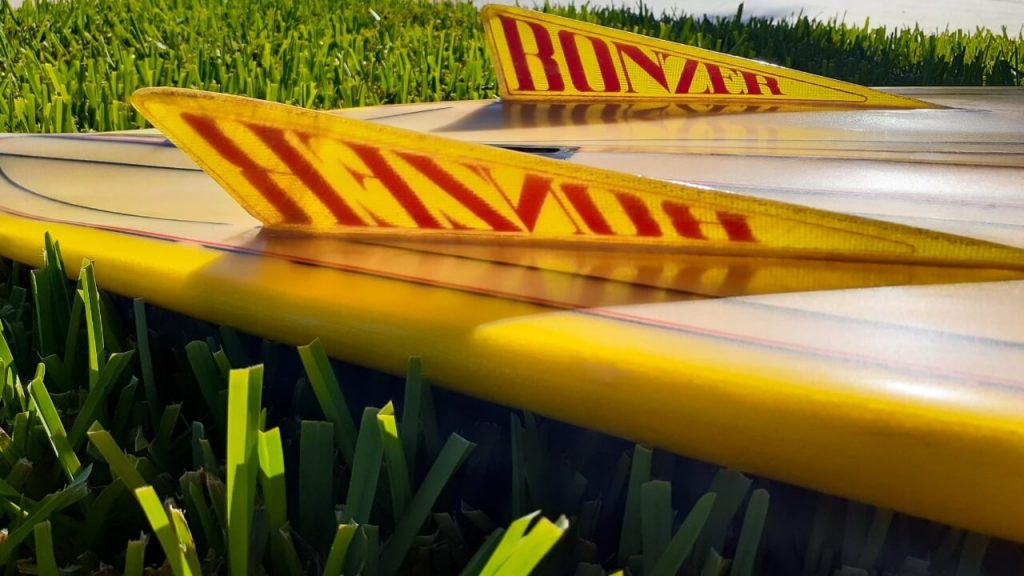 Greetings, Shredderz! Today we have another beautiful Bing Bonzer for your perusing pleasure. I have written up numerous Bing Bonzers on this humble little blog, and I’ll continue to do so as long as I keep finding ones to feature. The Bing Bonzer is not only a striking surfboard, it’s a historically significant one. The very first Bonzer designs were invented in 1970 by brothers Duncan and Malcolm Campbell, pre-dating the far more famous tri-fin thruster design by about a decade. The Campbell Brothers‘ collaboration with Bing Surfboards began in 1973, and I still get excited any time I see a new Bing Bonzer pop up. The board you see in today’s post was a submission from a gentleman named Bruce. You can check him out on Instagram here, where he posts some rad finds that he comes across in the great Sunshine State. Thanks for sharing these gorgeous photos of an amazing board.

There is a lot to like about the Bing Bonzer, but to me, the model’s calling card is the insane double concave in the tail. The photo above still throws me for a loop no matter how many times I look at it. The side bites are classic, too. If this sounds like every other Bing Bonzer post I’ve written on the blog, well, you probably have a point. It’s one of the few boards that I think I could literally look at for hours.

Bruce’s Bing Bonzer was shaped by Mike Eaton. As you can see from the photos, it also boasts some pretty incredible resin pin lines. (I believe it’s resin but I haven’t seen the board in person, so I can’t confirm.) The board is signed not just by Eaton but also Dave Hollander, who did the color work on the board. I’ve come to regard Hollander as a bit of an unsung artist, as he did some amazing and detailed work on a number of vintage boards. Don’t feel too bad, though — Hollander would later serve as co-founder and then CEO of surf retail giant Becker Surf. Becker is just one of the nearly endless list of brands whose roots began in the South Bay area of Los Angeles. Becker Surfboards was founded in 1980 when Hollander, Phil Becker and Steve Mangiagli bought out Rick Surfboards.

The reversible Bing logo is a great piece of graphic design. I don’t know if it’s regularly used today, but I love it.

The Bing Bonzer still looks positively space age, especially from the view in the photo above. It’s hard to believe the board is 45 years old. What’s even more impressive is the fact the Bonzer continues to live on as a viable board design, thanks to the Campbell Brothers’ ongoing commitment to shaping these boards.

Thanks to Bruce for sharing photos of his Bing Bonzer, and make sure check him out on Instagram here.