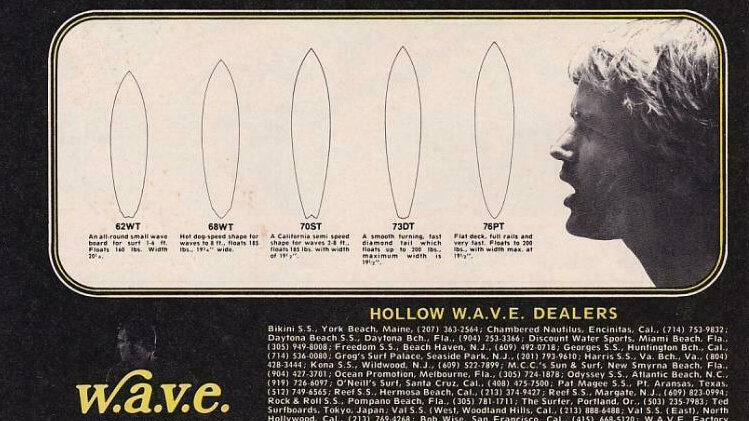 Greetings, Shredderz! Today we’ve got an incredible vintage surfboard ad featuring some of the most interesting and influential figures in surfing during the Seventies.

W.A.V.E. — Water Apparatus & Vehicular Engineering, Inc. — was a line of hollow surfboards produced in the Seventies. I have mostly attributed Tom Morey with having invented the hollow board design, which has an aluminum honeycomb design at its core, sandwiched between a molded top and bottom pieces, which were then glassed together. A 1991 Los Angeles Times profile of Tom Morey attributes the hollow design to Morey-Pope Surfboards. I’ve found another site (which seems suspiciously pro-Karl Pope), that claims Pope invented the aluminum honeycomb concept, and Tom Morey was merely one of the designers. W.A.V.E., for what it’s worth, is the same company behind the W.A.V.E. Set fin.

What is clear is that Dick Brewer designed a whole line of boards for W.A.V.E., and during that time Mike Purpus was a team rider. It’s worth reading Purpus’ endorsement in full, which takes the form of a note written to Brewer (who is referred to throughout as “RB”). Go beyond the clumsy copy (“Every RB Hollow made really is a Dick Brewer original”) for the story about when Purpus paddled out on a Brewer hand shape for the first time, which sounds like it was a revelation.

I originally found this photo on eBay, and you can see the listing here.