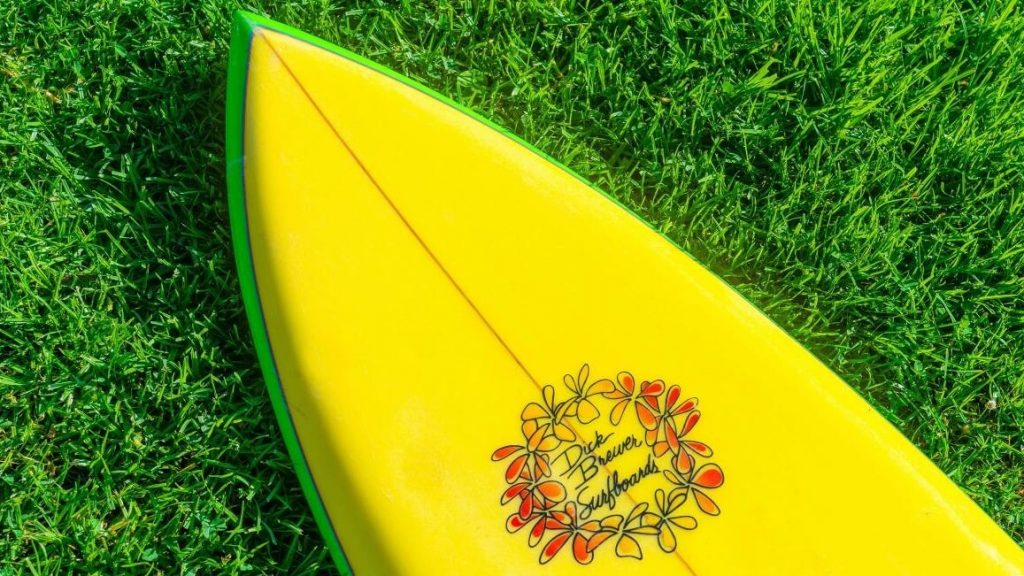 Greetings, Shredderz! They say the greatest things in life are free: turning on the radio right in time for the opening notes of your favorite song, being in love, the feeling of a stubborn bit of water finally dribbling out of your ear…and the joy of seeing a Craigslist post with great photos attached. Surfboards might not be free, but browsing is, so this one goes out to all you window shoppers out there: a killer Seventies Dick Brewer single fin shaped by Mark Angell, currently for sale on Craigslist in Los Angeles.

According to the seller, the board was shaped in 1978. The board was also shaped by Mark Angell. I’ve featured exactly one Mark Angell surfboard on the blog, which he shaped under the Haut Surfboards label. Brewer is known for shaping alongside a talented roster of craftsmen throughout his career, including Aussies (Mark Richards and Terry Fitzgerald), Hawaiians (Gerry Lopez, Reno Abellira) and Americans alike (Sam Hawk). I knew Angell grew up in Santa Cruz before relocating to Hawaii, but had never known about his association with Brewer. Angell still shapes on Kauai, and you should check out his website here.

No dimensions are listed on the post, sadly. The board has a bunch of other great details, and they are all well documented in the pics on the post. The outline of the board looks absolutely insane, and I am full on frothing over those wings in the tail.

The Mark Angell / Dick Brewer single fin comes with an original fin, too. The fin looks like it’s in incredible shape. Rainbow Fin has become shorthand for these vintage fins, but the one that comes with the board is actually a Fins Unlimited.

Here at Shred Sledz we have a deep appreciation for the entire board building process. It’s always nice to find boards that help tell the stories of all the people who build boards, and not just shapers. Sadly, I can’t tell you who glassed this Mark Angell / Dick Brewer single fin, but it must have been someone who knows their stuff. The orange and blue double resin pin lines are a killer touch, to say nothing of the rest of the glass job.

There’s no price listed. The seller says he’s taking offers. I’m not always a fan of that move, but it’s a minor offense compared to the sick board and the accompanying photos. You can find the listing here, and if you end up scooping this thing, I’d love to hear from you.