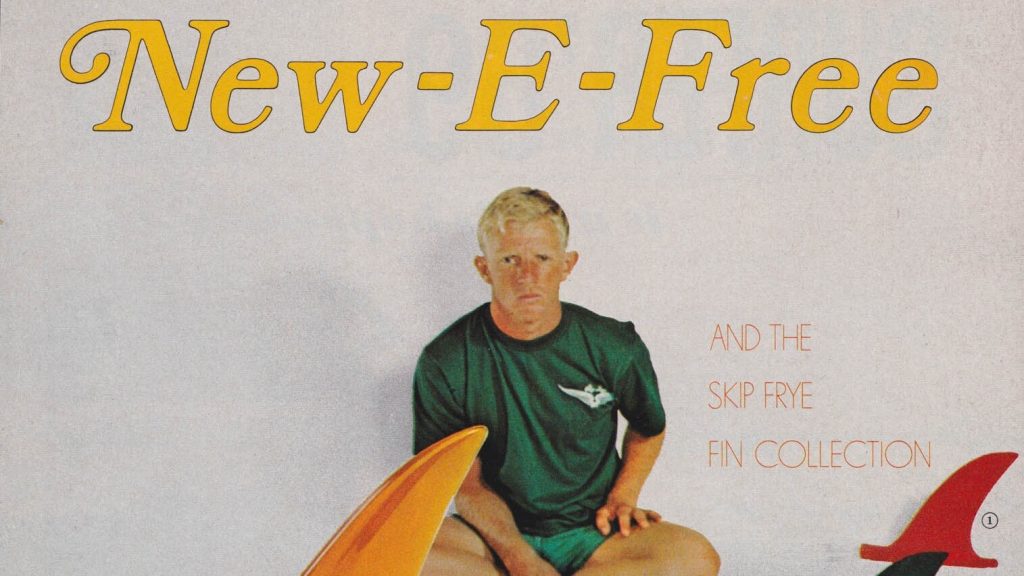 Greetings, Shredderz! I’ve written up Skip Frye’s boards countless times here on the blog. This time around we’re switching things up a bit, and focusing on what I believe is the first-ever Skip Frye fin.

Tom Morey and Karl Pope created W.A.V.E. Set in 1968, during the Transition Era, when every aspect of surfboard design was subject to wild experimentation. W.A.V.E. Set was one of the first removable fin boxes. While certain aspects of the W.A.V.E. Set box haven’t aged as well — I understand the fins themselves are very fragile — there is no disputing the influence of the design, given the core concept of swappable fins persists today.

Morey and Pope enlisted a few well regarded surfboard designers of the day to come up with various W.A.V.E. Set designs. Perhaps most famously, George Greenough produced a series of high aspect ratio fins for W.A.V.E. Set. The Greenough 4-A fin that is still widely sold today is based on some of his original designs dating back to the late Sixties.

One of the other W.A.V.E. Set designers was none other than a young Skip Frye, who was still riding and shaping for Gordon & Smith at the time. If you look at Transition Era G&S Skip Frye models — from the vee bottom (see here for a super clean example) to the minigun — you’ll notice they often come with W.A.V.E. Set fin boxes.

Skip called his template the New-E-Free. He also starred in a print advertisement for the fin, which appeared in January 1969.

I had seen the advertisement above many times before, but until recently, I had only seen the top half of it, which regularly makes the rounds on Instagram. I recently stumbled across an excellent website, The Finbox, that not only had a high quality scan of the original Skip Frye New-E-Free ad, but much of the information on W.A.V.E. Set that I included earlier in the post. I highly recommend checking out The Finbox’s incredible collection of vintage fin ads, including a number of Greenough W.A.V.E. Set ads.

What’s really interesting about the ad is how it charts the progress of the design that ultimately became the New-E-Free. I’ve reproduced the text in the photo below:

It all started last spring. The short board thing hit full blast. Suddenly, we all realized it wasn’t just a fad and deep fins and long boards were out. Skip felt that a shorter fin was the next important step towards the full drift freedom he and other surfers wanted from their new short boards. He began last spring cutting down ABS Greenos (sic), Bings, an (sic) G&S fins to obtain the four shapes shown above. Here’s what happened.

Second — A cut down Greeno. Shorter, raked more. Faster than the first try but still not enough side drift.

Super High Drift — Scary. This shape went a little too far for most surfing conditions. It’s very short (2 1/2″) and doesn’t quite have enough area for good trim stability. A slight tendency to break out on steep waves was also a problem.

Results: for the best combination of drift, stable turns, and trim speed, a compromise between Number Three and The Super High Drift was Skips answer. He called it the New-E-Free.

Now, after a 6 month fin research program, the formula foiled New-E-Free is available for Wave set owners only. Remember, the Skip Frye designed New-E-Free is not the cut off tip of an old fin mold, but a brand new surfing tool featuring the Wave FORMULA FOIL & HYDRODYNAMIC TAPER. Formula foiling gives all Waveset fins minimum drag and maximum speed. Hydro Taper results in proportional flex in every surfing maneuver. For a surfing experience impossible to describe, get the New-E-Free now! Watch for variable Waveset the adjustable fin system. Coming soon!

The copy strikes me as classic Tom Morey, especially with the all caps shoutouts for new design concepts (which, if we’re being honest, seem to have more flash than substance). It’s interesting to contrast the dimensions of the New-E-Free with the fact that Skip was looking for a design that would “drift freedom” and “side drift.” I don’t have measurements on hand, but the New-E-Free is quite short, which I imagine would affect its performance. Perhaps some of this was intentional, though, based on the ad’s mention of “drift.” Performance aspects aside — and the New-E-Free would be far from the first idea from the Transition Era that didn’t quite last — any Skip Frye fin is worth noting, especially one this old.

Thanks for reading and we’ll be back next Thursday with more Sagas of Shred!