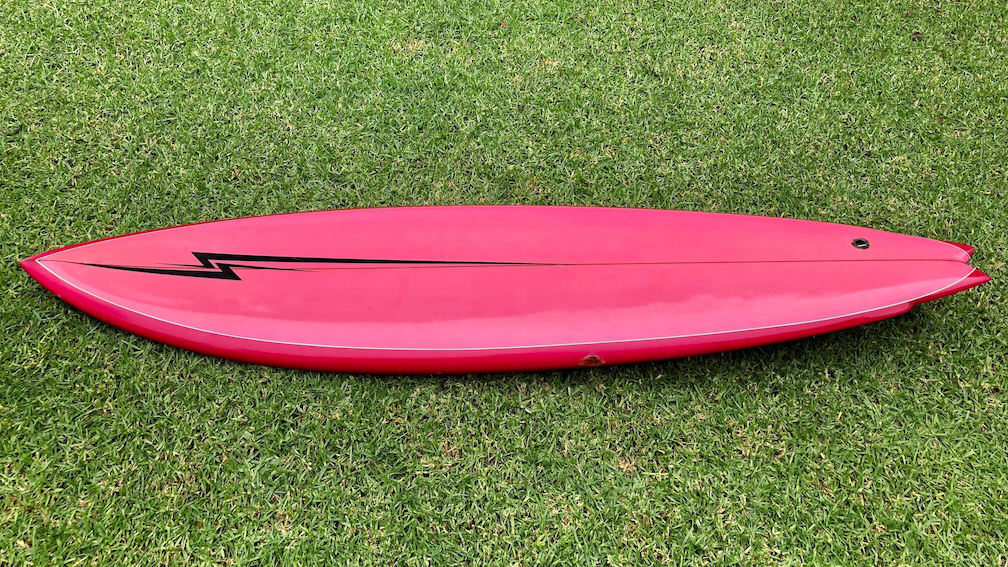 Greetings, Shredderz! Today we have an absolutely classic stick for you. Yes, it’s a cool board, but what’s even better are the great stories behind the shape, whether it’s the various craftsmen who built it, or the mini saga that transpired when the owner bought the board sight unseen, based on a hunch and some dogged research. Pictured here is a Tom Parrish Lightning Bolt single fin shaped in the Seventies. The board is all original and it is in remarkable shape. Parrish is well known for his collaborations with Jeff Hakman, and for being one of the standout names on the incredibly deep and talented roster of Bolt shapers. Parrish, now based in Maui, still shapes boards today.

I don’t think I need to explain the appeal of a Tom Parrish Lightning Bolt surfboard, especially one that has been so well preserved. The other thing about this board I love is the fact it was glassed by Roy Stamm, who, despite being a respected glasser in Hawaii during the Seventies, remains an elusive figure.

Many thanks to Andy, who owns this Tom Parrish Bolt and was kind enough to share the photos and story behind the board. You can follow Andy on Instagram here. Andy originally spotted this board on an overseas website. After poring over the photos and doing a ton of detective work, Andy guessed the board was likely to be a Tom Parrish Lightning Bolt, and took a chance and bought the board without ever having seen it in person. His wager turned out to be correct, and I think it’s safe to say he’s happy with how everything turned out.

As you can see, the board boasts an incredible glass job, courtesy of Roy Stamm. Glassers tend to be under the radar types anyway, but even by that standard, Stamm is something of a mystery. First of all, he is not well known to many folks, despite the fact he was one of the best regarded glassers during Lightning Bolt’s heyday. Secondly, it’s unclear if Stamm has stayed in touch with anyone from his board building days. I take it he is no longer involved in surfboard building, but I am not sure.

The owner of the board contacted Randy Rarick, who had the following to say about it:

This is a cool looking board! Roy Stamm was one of the “Unit 1” glasses. He did mostly Lopez’s, Reno’s, BK’s [boards]. You can tell by his distinctive Bolts and also by the use of the Rapidograph Ink pen writing, where he used the stencils for the lettering. Also, the fins with the horizontal lines were unique to his glass jobs. He was regarded as one of the best of the various glasses who did the Bolts.

Parrish also posted this board to his Instagram a while back, and here was his caption:

Glassers are the unsung heroes of the custom surfboard industry. They can make or break a nice shape job. From setting the fins, to the right choice of glass, to the sanding and polishing, a good glasser is easily as important and valuable as is having a good shaper. I was lucky to work with Boscoe Burns and Steve Cranston and both gave me so many special glass jobs during the L Bolt years and were a total pleasure to work with. This board, however, was glassed by Roy Stamm, who did many, if not most, of Reno and BK’s best work for L Bolt during the 70s. The other day a new friend in Oz mailed me a photo of this board done by Roy. Roy was always a mysto sort of guy, never seeking the limelight. I was very fortunate to get him to do.a few too Anyone who knows his work, knows what a special guy and glasser Roy Stamm was/is.

The fin, like the rest of the Tom Parrish Lightning Bolt board, is insane. I really dig the horizontal lines on it, and it just looks incredible. If nothing else, the photos convey the sheer craftsmanship of the Stamm glass job.

There isn’t much mention of Roy Stamm online, which is a shame, given his contributions to board building. The board’s owner was kind enough to point me towards a trio of Bolts recently sold at auction, which were all glassed by Stamm; however, all three boards have since undergone full glass-off restorations. As far as I know, the only examples of boards glassed by Stamm are ones I have featured earlier on the blog: here’s a gorgeous Lightning Bolt single fin (note the two-tone Bolt on the deck); and here’s an amazing board Terry Fitzgerald shaped for Bolt.

One other tidbit regarding Stamm’s history: the board’s owner posted photos to Facebook, and in that thread, fellow Lightning Bolt stablemate Tom Eberly talks about how he and Stamm used to work at Island Surfboards in downtown Honolulu, which was owned by Bill Stonebraker.

Here are some closeups of the lettering on the bottom of the board. It is consistent with the other Roy Stamm boards I have seen. According to Parrish, Stamm used stencils to do much of his lettering, but upon closer inspection, it looks like the lettering here was likely done by hand.

Many thanks to Andy, the board’s owner, who was so generous with sharing not just the story of the chase that landed him this incredible Tom Parrish Lightning Bolt, but also the spectacular photos you see here. I am grateful that Andy’s story and his pictures can help tell the story of a beautiful shape from earlier in Parrish’s wonderful career, as well as highlight the role that Stamm played in making Lightning Bolt one of the most famous surfboard labels of all time.

Correction: an earlier version of the post attributed a quote to Tom Parrish, when it was in fact Randy Rarick. The post has been updated.