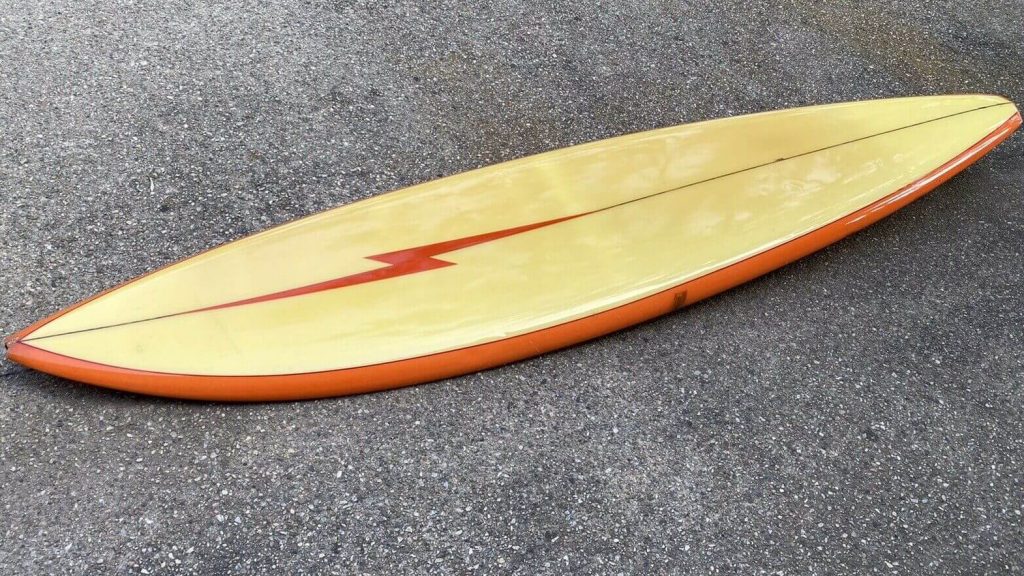 The board you see here sold on eBay just this past week. All the photos are from the original listing, which you can see here. The closing price for the board was $6,250. Here are some other recent Gerry Lopez Lightning Bolt sales for comparison. The 2020 California Gold auction had two Lopez Bolts, both of which were recent re-issues: the first, shaped in 1999, was a 7’10” Pipeliner that sold for $9,500; the second, which was undated, was an 8’0″ pintail that sold for $7,500. Just about a year ago the California Gold folks put on a Lightning Bolt-focused auction, and there a restored 1978 7’6″ Pipeliner went for a whopping $20,000.

Whenever I’m asked to weigh in on surfboard prices, my stock response is “it depends.” It’s not a cop out, I promise, and it’s true in this case, too. Is $6,250 a fair price for an original Gerry Lopez Lightning Bolt single fin? I tend to think so, especially given that, as far as I can tell, the board is all original. Then again, the board is clearly in need of some significant repairs. And while I prefer all original boards, the market clearly disagrees. I hate to say it, but I think this board would probably be more valuable with a full glass-off restoration, though I personally like to see as much original material remain intact whenever possible.

The Gerry Lopez board has a bunch of interesting details. First, the board has a diamond tail. When I think of a classic Gerry Lopez Lightning Bolt board, I think of a pintail, but after doing some research, I have seen a few other Lopez Bolts with similar diamond tail designs. I would say the diamond tail is less common than the pintail on Lopez’s Seventies Bolts, but I don’t have any data to back up that claim.

The other detail that threw me for a loop was the small Southern Cross laminate on the stringer. Gerry Lopez and his Lightning Bolt boards are practically synonymous with Hawaiian surfing, so how on earth did a distinctly Australian graphic find its way onto the board?

The answer, it turns out, is the board was glassed in Hawaii by an Aussie gentleman by the name of Ted Wilson. Wilson has apparently been living in Hawaii since the Seventies, and is still glassing surfboards today. I found this information in an excellent and thorough Facebook post from the Surf Trip. The Surf Trip post has another example of a beautiful red Lopez Lightning Bolt surfboard also glassed by Wilson, with the same Southern Cross laminate and serial number format. Wilson’s serial number on the board, found above the Southern Cross, tells us that it was shaped in 1975.

Finally, the signature on this board is a bit of a mystery to me. First, let’s go on a short tangent discussing how Lopez historically signed his hand shaped boards. Gerry Lopez and Lightning Bolt are both Hawaiian icons, but during the height of the label’s fame, there was also a California factory producing shapes. What makes this confusing is the so-called California Bolts, despite being shaped by mostly Terry Martin or Mickey Munoz, were often signed “Gerry Lopez.” These signatures were done by Danny Brawner, and not Gerry himself. Here’s a classic example of a California Bolt with a “Gerry Lopez” signature likely done by Brawner. The rule of thumb I have used to identify authentic Lopez hand shapes is Gerry signed his hand shaped boards with “LOPEZ” in pencil near the stringer, always underneath the glass.

What’s strange about this board is that you can see the pencil “LOPEZ” signature underneath the glass. However, there’s also a pen signature sitting on top of the glass as well. I’m a little confused by the double signature. I don’t doubt that this is a genuine Lopez hand shape; a collector told me that he contacted Gerry himself, who confirmed the authenticity of the board. I’m curious why there was an additional signature on top of the glass. If I had to guess, this is probably something Ted Wilson did whenever he glassed Gerry’s boards.

For those who can’t resist rabbit holes, there’s a surprising variety of signatures on Lopez’s hand shaped boards. Here’s a Lopez board with just a pencil signature under the glass; and here’s one with just a pen signature on top of the glass, which I think is likely a Gerry hand shape, but can’t be 100% sure. If you really want to get confused, see below for a signature I saw on a Craigslist board a while back. It’s not a Brawner California Bolt signature, but it’s done in script, unlike the block letters of most of the Lopez signatures I have seen. Your guess is as good as mine.

If there’s one lesson to be learned from trying to unravel the provenance of vintage surfboards, it’s that things can often be confusing and inconsistent. But trying to figure out these small mysteries is often what makes this research interesting.

CORRECTION: An earlier version of this post incorrectly stated the board was shaped in 1977. It was actually shaped in 1975.